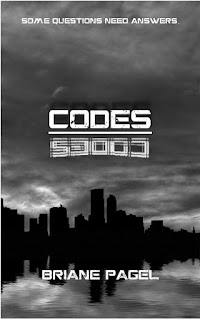 Prior to its release, author Briane Pagel said about Codes that it's the best book he has written so far. After reading it, I would have to agree with him. And that's not something you should take lightly, because Pagel has written some pretty good books.

And, hey, there are hardly any editing issues in this one. And none that I can remember, now, which means, basically, that there was nothing more than simple copy editing issues and not many, at that.

The worst thing you can say about the book is that it wasn't long enough. I mean that in the "I really wish there was more of this" way and not the "This feels like author rushed it to keep it short" way. I don't know if there's a better thing that can be said about a book than "I wish there was more of this." In fact, it would have been great to have gotten to see more of all of the characters other characters, to say something that's really confusing but will make sense if you read the book. Actually, this could have been a really great mystery story, but, then, it would have been a different book but not necessarily a better book.

Okay, I think might be letting some of the book seep into me. Who am I again?

Anyway, this is the kind of story that Pagel does very well. It's a bit experimental but, still, mostly mainstream, and most of the experimenting is done in the text. And, yeah, that probably doesn't quite make sense, either, but, again, you have to read the book. Mostly, though, the thing he does well is let you see events from different characters' perspectives, which is important in a story like this.

So there's this one part that I have to mention:
There's a bit where Robbie gets a communication from someone on his... computer thing. I want to say laptop, but that might not be what it was. People are after him, and he gets this communication from this other guy that tells him to go out the window. It was like that scene in The Matrix where Morpheus tells Neo to go out the window and Neo does, but, see... and I don't want to spoil it, but I thought what Pagel did was great and much more likely to be... Yeah, likely to be.

Another major point for the book is that any time you think you know what's going on, you find out you don't really know what's going on. But in a good way. It's all just another piece of the puzzle. There were a couple of things that were very unexpected, though, and one of those was probably brilliant. And I'm going to leave it at that, because I can't really say anything else without spoilers, and this is a book you don't want spoiled.
Posted by Andrew Leon at 12:00 AM