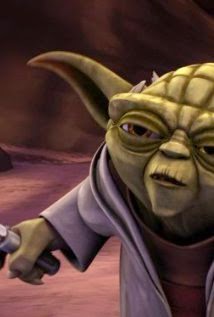 -- Great leaders inspire greatness in others.

The first episode of The Clone Wars television series starts us off with some good old-fashioned Yoda shenanigans. I'm talking a Yoda that hearkens back to The Empire Strikes Back, mischievous laugh and all. And teaching moments. It's interesting how little teaching we get from the Jedi's greatest teacher in the overall scheme of things in the Star Wars universe, so it's nice to see him sit down with some clones for a nice teaching moment.

For many, this is also the first real introduction to Asajj Ventress, the semi-apprentice of Count Dooku. Ventress is an interesting character and one integral to the Clone Wars story line, but, here, she plays the more passive role of temptress, serving in the background rather than as an opponent to Yoda.

The most important aspect of this episode has to do with the clones and the acknowledgement that, though clones, they are each individuals. Or, at least, have the capacity for individuality. They don't often see it in themselves, but Yoda makes it clear that the force lives in each one of them making them unique beings, one of the same themes the widely popular Orphan Black is currently exploring (but it was done here, first). [This is a theme that will be revisited throughout the series.]

And there are the droids. The droids do get played off for comic relief throughout the series, and I can understand that being upsetting to certain people, the same people who get upset about Ewoks and Jar Jar. All I can say about that is some people project too much seriousness into a story that was always meant to contain humor. So, sure, the battle droids AI is a little faulty. Or just not very bright. Which makes sense, since you want the droids to be just smart enough to follow the order of, "March out there and be killed," but not smart enough to respond with, "No way! I'll get killed!" They allow for a little bit of fun in a show (for kids) that would otherwise be way too serious.

"Ambush" is a good starting place for the series. It's hard to go wrong with Yoda.

"I just got promoted!"

It's not too late to get signed up if you'd like to join The Armchair Squid and me on this Clone Wars journey. Actually, it will never bee too late. Just follow this link to the signup page!
Posted by Andrew Leon at 12:00 AM