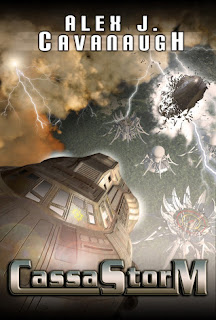 The first and most obvious thing to be said about CassaStorm is that it's an obvious effort by the author, Alex Cavanaugh, to expand the universe he established in the previous two books. We find out that Tgren does, indeed, have more than one city on it and even get a peek at the other races only hinted at previously. And the end provides an explanation for some of the things that haven't made the most sense in the series overall, like the significantly low populations of the races.

There are ways the explanation creates more questions, but that's okay. Leaving questions unanswered is not something I necessarily have a problem with.

'Storm also rounds out the relationship progression of the other two books. 'Star deals with friendship, 'Fire deals with romance, and 'Storm deals with parenthood. As with the other two books, Byron has to figure out how it's supposed to work. The only issue with this idea in 'Storm is how it contrasts to the other two books. Both of the other books deal with Byron and initial meetings (first with Bassa, then with Athee) and 'Storm, in many ways, follows that pattern. The problem is that his son, Bassan, is already 10, and there are parts where it's like Byron has no idea of how to interact with his son in the same way as with someone you are just meeting.

This is both a strength and a weakness in the book, because in actuality Byron doesn't have any idea who his son is. It's clear that he's one of those who father's from a distance, and he is, in fact, learning who his son is. The problem is that there don't seem to be any clearly established patterns in their relationship as is usually the case. Neither the son nor the father ever seem like they know what to expect from the other.

There are a few interesting wrinkles in this book, like the introduction of the Rogue, which I didn't see coming. That's a big positive for me, because most books fall into established patterns making it difficult for me to find books that aren't fairly predictable. Possibly, the biggest issue I had with 'Fire is that I knew what was going to happen throughout the book; nothing was surprising. However, with 'Storm, every time I thought I had what was going to happen figured out, there would be some new wrinkle. It made the book a worthwhile read just to figure out where he was going with the story.

Basically, if you read the previous two books and liked them, you should definitely read this one. I can't see how it could be a disappointment. It's even possible that this book could be read as a stand alone, because any background information needed is provided. Sure, the other two provide a bigger picture, but I don't think they're necessary.

Look, this isn't deep or philosophical. It's pretty straightforward space opera in a Star Trek kind of vein. It deals as much with relationships as it does with space battles, but that serves to strengthen the book in overall sense, not weaken it. Hmm... Still, if you want space battles, CassaStar is probably the book for you if you haven't already read it. Not that there aren't space battles in 'Storm, but it's, ultimately, a different kind of story.
Posted by Andrew Leon at 12:00 AM