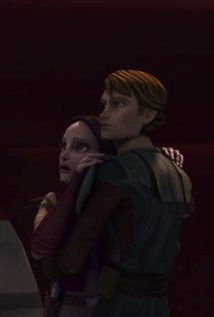 -- A plan is only as good as those who see it through.

This episode hearkens back to A New Hope and the Death Star rescue. See, the Malevolence is a huge ship. Massive. It's three times bigger than the standard Imperial Star Destroyer (though still dwarfed by the Super Star Destroyer). Grievous, through the machinations of Darth Sidious, is able to take Padme (almost) hostage while trying to escape from Republic forces. Anakin, of course, goes to rescue her. There are also overtones of the droid factory from Attack of the Clones.

This episode also has what I think is the first physical confrontation between Obi-Wan and Grievous. Without looking up and cataloging all of their meetings, this seems to me to be an ongoing theme in Clone Wars which, of course, culminates in their final duel in Revenge of the Sith.

Probably, the most interesting part of the episode has to do with transportation inside these huge ships. Imperial Star Destroyers are pretty close to a mile long. Haven't you ever wondered how people get around inside of them without it taking forever? Especially on something like a Super Star Destroyer, which is close to four miles long. Imagine: You have a meeting with Vader in half an hour, but you're on the wrong end of the ship. How do you get there?

Of course, the Space Balls answer was interior teleporters. But Star Wars doesn't actually use teleportation, so maybe being force choked for being late is your only option.

Or is it? The answer "Destroy Malevolence" provides is a kind of high speed tram system. Considering that the Clone Wars series is canon, I have to assume that this is the official answer as to how people (or droids) get around on these huge ships. We don't get to see much beyond the bridge area of the Star Destroyers in the movies, but I would love to see how these would look. Not that I expect that we'll get any better look at the interiors of Star Destroyers in episode VII.

At any rate, it's a fun episode. It's fun to see Anakin on the rescuing side of the whole rescue-the-princess thing.
Posted by Andrew Leon at 12:00 AM