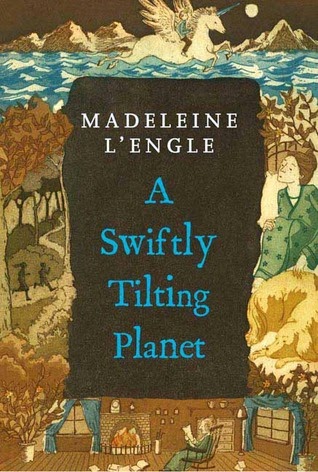 My first ever oral book report was on A Swiftly Tilting Planet. I chose it because I had so much enjoyed the book. And, hey, it had a flying unicorn. I got an A on the written report; I didn't do so well on the oral presentation. I never let that happen again, though. It was what you call "a learning experience."

Three books into reading (and re-reading) L'Engle's Time Quintent and I'm finally realizing what it is, exactly, that I don't like about them. The characters don't do anything. They spend their time being taken from place to place by various cosmic beings because they're so important but, in the end, they don't actually do anything to affect the outcome of the story. The closest we get to anyone doing anything is Meg in A Wrinkle in Time in which she says the magic words of "I love you" to her brother to break the spell he's under. A Swiftly Tilting Planet is the worst offender so far.

There will be spoilers.

The world is on the brink of a nuclear war and Charles Wallace is tasked to stop it. He has one day to do it. One day to figure out how to get the madman who is about to start the war to change his mind and not. A madman who is on a completely different continent.

Luckily for Charles, a unicorn shows up to help him and his sister's mother-in-law gives him a magical poem to say. L'Engle relies a lot on magic words in these books. Just say the magic words at just the right time and the day is saved! That's what happens in Wrinkle, and that's what happens in this book. Every time anything bad is happening, the poem is recited and everything is better.

But let's get back to Charles and the unicorn. The unicorn, as it turns out, has wings that come out of his sides. When Gaudior, the unicorn, is just standing around, he has no wings. It's probably a personal bias, but the whole thing with the wings just seems silly to me. The unicorn, by the way, uses his wings, mostly, to fly through time; he's no good at flying through space, according to him.

To stop the madman, the unicorn takes Charles travelling through time. Now, you'd think that would be because Charles is supposed to change something to stop the madman, but, no, actually, Charles is just there to go "Within" different characters and observe. Maybe he'll learn something with which he can stop the crazy dude from blowing up the world. So that's what we spend the book doing, travelling through time learning the history of Crazy Dude's family.

Now, the special, magic poem has been in the family for ages (Meg's mother-in-law is from the same family), so, mostly, we just watch people get into bad situations and recite the poem to fix everything. But, evidently, nuclear war is too big for a poem. We travel along until we get to the father of the madman. What we learn along the way is that he has the wrong father. Or grandfather? At any rate, the wrong man married the woman and, so, we get a madman that wants to blow up the world.

It turns out that the wrong man married her, because he killed the other guy. The two men were fighting over the woman, and the bad guy stabbed the good guy and threw his body off a cliff. Charles Wallace ends up in the same time as the two guys who will fight over the woman, but is he put in a place to affect any kind of change over the outcome? No. He's put into a guy thousands of miles away. A guy who is dying of, probably, tuberculosis.

So, when it comes to the point of the fight, the guy that Charles is in is in the middle of a fevered sleep, and Charles, making his first effort to affect change in the time he's in, keeps whispering in the guy's head, "Do something." The thing is, there's no way for either of them to know that the fight on the cliff is happening at that moment; they just do. But the sick guy can't wake up and they're thousands of miles away, so they do absolutely nothing. But the outcome of the fight changes anyway. The good guy turns to find the guy trying to stab him, knocks the knife out of his hand, and the bad guy, in an effort to catch his knife, falls off the cliff. So the good guy marries the woman, and the madman is never born.

Of course, when Charles Wallace gets back, no one knows anything about the imminent nuclear war. Only he (and Meg, a bit) can remember what almost happened.

Needless to say, I was very dissatisfied with the ending of the book. Actually, I was dissatisfied with most of the book despite the fact the some of the historical bits are interesting. What the book reminded me of is kids playing on a playground and shouting "magic words" to win their battles against imaginary enemies. So, again, I am left with the impression that these are really kids' books, not like, say, The Chronicles of Narnia at all, books that you can revisit throughout your lifetime.

Except that, well, past Wrinkle, my kids have really struggled to read these. My younger son wasn't able to get past the first couple of chapters of A Wind in the Door despite that he tried twice, and my daughter started Swiftly something like four times and just couldn't get interested in it. Maybe, they're already too old. What I do know is that if I had re-read these before handing them to my kids to read, I wouldn't have bothered to do it. Beyond a few concepts, like the tesseract, I haven't really found anything worthwhile in the books.

[Which isn't going to stop me from finishing the series, because I'm already halfway through book four (and it's even worse).]
Posted by Andrew Leon at 12:00 AM