Ninja Mutants: An Extended Review -- Part One: The Bay Movie 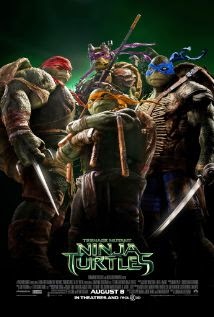 The new Bay Ninja Turtle movie is one of those that I could hardly avoid seeing. For one thing, my daughter has been dying to see it ever since she first saw the trailer for it. Yes, you heard me right: my daughter. Which is not to say that my son (the younger one) didn't want to see it, but it was much more passive with him. You know, sure, he'd like to see it but, if he didn't get to, it wasn't gonna kill him. Not just did my daughter have to see it, but she had to see it ON OPENING DAY! OR ELSE!

So we went to see it on opening day. It wasn't the first showing, but I'm here writing this, so it must have been close enough to it to keep me alive. For now.

Added to all of that with my daughter, I like the Turtles. The original comic series was pretty brilliant, and the first movie (1990) was so well done it sealed my fate as a fan. That said, I never liked the original animated series. I was more than a few years too old for that when it came out, and "silly" was probably the best description I ever had for it. Needless to say, the Turtles have undergone many changes and interpretations over the years, so I'm not going to try to compare this to any previous incarnations. As much as that's possible, at any rate.

There will be spoilers:

As with any Michael Bay movie, the story is the movie's weakest link. If you've seen The Amazing Spider-Man, you might recognize the plot device of releasing a pathogen from a tower on the top of a prominent building in New York City which accompanies a rooftop battle to stop said release of said pathogen. Add to that the rather overused (at this point) plot of having a secret stash of the antidote to the pathogen on hand to charge the unsuspecting populace for and become insanely wealthy and you'll see the lack of thought that went into the story. Even the twist, that the antidote is in the blood of the Turtles and they must be drained to retrieve it, has been done more times than I can count. Or remember.

But, hey, I suppose considering their target audience... actually, I'm not sure what their target audience is since I'm sure they're trying to get the nostalgia audience along with the kids... Oh, well, for a movie more geared toward kids, I'm sure the plot is fine. Mostly, what the movie needs is good, snappy dialogue, and it has that. My daughter loved Michelangelo because he was so funny. Honestly, there were a lot of laughs in the movie, which ought to be the case for a Turtle picture.

And, as in any Bay movie, the action was spectacular.

There's nothing to complain about with the acting, either. Megan Fox was good as April O'Neil, maybe better than good. She really was the part. Will Arnett was great but, then, it's hard not to enjoy Arnett. The voice actors did a great job, especially Tony Shalhoub whom I didn't even recognize during the movie. Possibly the only issue with the acting wasn't actually an acting issue but a casting one: As soon as I saw William Fichtner, I knew he was the bad guy because, well, that's kind of what he does. It's not fun to know who the villain is because of typecasting.

Speaking of the villain, the other villain, Shredder, although he does have the huge rooftop battle with the Turtles, is hardly the bad guy in the movie. He's just this sort of background character who seems to be controlling things, but, other than the fight, he's not really there. That was disappointing. He, as a character, was hardly menacing because of that. The only thing that made him scary was the huge cybernetic armor suit that he had. I mean, really, anyone can have a suit.

The other main issue goes back to the story, and that's having the Turtles start out as April's childhood pets. It's like ever since Tim Burton did that whole "I made you" thing in Batman, everyone has to have everything circle back around and be all connected and stuff. I suppose it's supposed to make it cooler but, really, it doesn't do anything for me other than cause my eyes to roll. Seriously, it's not even voluntary.

Still, as long as you buy into the plausibility of the Turtles, there's nothing really to break the suspension of disbelief. It never goes to "Seriously!? You expect me to buy that?!" Even the big rig scene stayed within the bounds of Ninja Turtles.

Basically, it's a fun movie... if you like the Turtles. Or if you're a kid who is going to end up liking the Turtles after seeing the movie. If you're not a Turtle fan, this one's probably not for you.
Posted by Andrew Leon at 12:00 AM