Singin' in the Rain: My Kind of Musical (a musical review) 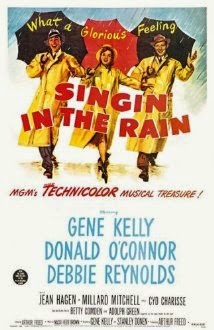 A few weeks ago, I did this post about musicals, which was at least partly inspired by the great musical film Singin' in the Rain. Singin' in the Rain is my kind of musical. Which is to say that it's not the kind of musical where a huge crowd of people suddenly bursts into song and starts doing a dance routine, which is the thing about musicals I've never been able to get into.

Singin' in the Rain does its music on a much smaller scale, a personal scale, which I really enjoy. Its eponymous song is just Gene Kelly and is completely appropriate to the nature of, well, everything. If you've ever been in love, you'll understand.


My kids' favorite song, "Make 'Em Laugh," is another of those that just feels appropriate to the action of the movie.

Speaking of "Make 'Em Laugh," Donald O'Connor is wonderful. Completely amazing. So much so that I had to rent some of the Francis, the Talking Mule movies for my kids, so they could see him in some other movies. They preferred Singin' in the Rain, which kind of surprised me, because I loved the Francis movies when I was a kid. All of the performances are great, though, not just O'Connor's.

And we thought breakdancing was something from the '80s.

Here's the other thing about Singin' in the Rain: If you've seen it, you don't need to bother to see The Artist. Both movies are about silent film stars making the transition to "talkies," but Singin' is so much more charming in its approach and, overall, just a much better film. Really, there was no need for a movie like The Artist with Singin' already out there.

For those of you out there who "don't like musicals," you should give this one a look, anyway. There's a real story, here, that's well-told. The acting is strong. The music is well integrated and classic. It's unfortunate that the movie is "old" and not noticed much anymore, because it's quite an excellent film.
Posted by Andrew Leon at 12:00 AM