Disclaimer: Portions of this review are going to sound like I liked the book much less than I did. Just know from the beginning that I liked the book. I'm going to read the next one. But I'm still going to talk about the things that bothered me as I was reading. Mostly because they allow me to talk about some writing things within a context that gives an example of what I'm talking about.

Also: Although this is a traditionally published book, (if I have my facts straight) it started out as an indie book published serially on Scalzi's blog where it was "discovered," so I'm sort of looking at this from the aspect of covering an indie writer, albeit an indie writer that has made it big.

But let's get on with the review.

The first thing to note is that the book is in first person. Now, this is my own bias, but I'm beyond tired of first person stories. Unless there is some specific reason for first that can't be accomplished in third (like the tone of The Dresden Files and the fact that first person is part of the whole detective genre thing), I'd rather not see first person for a long, long time. Like I said, this is my own thing and may come from the fact that almost all I see is first person stories from the middle schoolers I work with despite how often I tell them to write in third. I only mention it at all because it does cause an internal groan from me at this point when I open a book and it's first person.

The next thing springs out of the first thing. There's this thing that frequently happens with sci-fi writers (sometimes fantasy, too, with magic systems). They come up with these brilliant sci-fi ideas, and they want to share them with you. Like, for instance, if I want to have a teleporter in my story, but I can't just have the teleporter because that's been done a lot, right, so I have to have some cool idea about how a teleporter works; that's what makes it mine. And, if I have the idea, I want to share it with you. In a third person story, this isn't such a big deal, because you can include a description in the narrative and it doesn't necessarily seem out of place. However, in a first person story, it's usually like inviting someone into your house then explaining how the TV works and the computer works and the cell phone works. The thing is, most of us don't have more than just a vague idea of how those things really work, so when a character in a book who is just a normalish guy starts explaining how high tech gadgets work, then it feels out of place.

Fortunately, Scalzi doesn't quite fall prey to that trap. Rather than have John Perry explain all that stuff to us, he has it explained to him, which makes Scalzi's desire to share his clever ideas mostly acceptable. Actually, the first clever idea is more than acceptable, because there's a political reason for the tech, and that was interesting. The second clever idea is also acceptable because it's something that's happening to Perry, but they start becoming gratuitous after that because they're things that most people wouldn't have an interest in knowing and are actually frequently accompanied by "you don't have the math" to explain why Perry doesn't and can't understand the things being explained to him, yet he persists in having the people give the explanations while maintaining that he doesn't know what they're talking about.

The other thing I had an issue with was that Perry was the cleverest guy around. Which isn't of itself an issue except that he would point something obvious that no one else had ever thought of. This is actually a major plot point in the book, that Perry notices something that decades worth of people, many who should have been much smarter than him, have completely dismissed as irrelevant or trivial. It was a thing I couldn't buy into. There wasn't even a "yeah, we noticed that, but we don't know what it means," which could have worked. Instead it was, "yeah, that's nothing. It doesn't mean anything." Which, of course, was wrong.

Beyond that, I had a difficult time having any emotional investment in the book. I was never worried about Perry or, even, really cared about him. I think it was the first person and the style he used within the first person. It had that feel of someone sitting right in front of you telling a story, but, you know, the guy is right there in front of you, so you know everything comes out okay in the end, so to speak. It made it hard for me to engage beyond a surface level.

That said, it was a great surface level book. The world (multiverse) that Scalzi has created is interesting, and I want to see where he's going with the meta-story. Perry's voice as the narrator was engaging so, even though I wasn't worried about him, I did want to know what was happening. It was engaging right from the beginning, too, so there was never any point where I thought I might not be able to get into the book. The parallel opening and ending was a nice touch.

In short, it's a quick, light read. If you like space opera, you ought to read this book.

ALSO!
The new issue of Indie Writers Monthly is out! 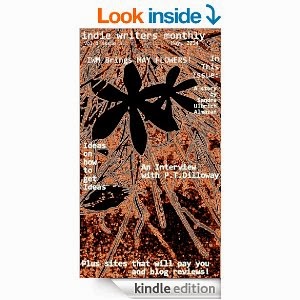 You should pick up a copy today! I know I will!
Posted by Andrew Leon at 10:09 PM