Let me just state right here at the beginning that I am still not in favor of Sony's reboot of the Spider-Man franchise; however, seeing that they have, and that this movie is based off of the previous (un)Amazing movie and not Raimi's series, I have to say... okay, I'll sum it up like this: This one made me tear up. 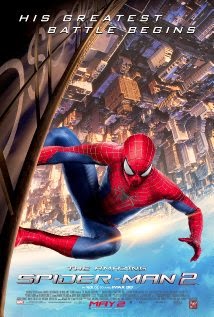 I think I've mentioned before that I don't cry at movies.

I'll try to keep this as spoiler free as possible, but I am going to talk a bit about the set up. More movies need a good exposition; it sets up the emotional impact.

This scene sets up two of the three major conflicts for the movie: the romantic conflict between Peter and Gwen, and the physical conflict between Spider-Man and Electro. The third conflict revolves around Peter's continued exploration into the deaths of his parents, a story line they are developing at a nice pace and are handling better than expected. [This is spoilery, but, being someone who never knew his father, the scene between Peter and May was excellent. His assertion to her in the face of her reluctance to tell him anything that "it's not about you" is so right.]

And that's as far as I can go without giving things away but, from an emotional standpoint, this movie is way beyond the first one. Garfield really brings you along on his emotional ride as both Peter Parker and as Spider-Man, and I don't think that's a small thing. Like I said, I teared up.

Emma Stone put in a great performance as Gwen Stacy. Jamie Foxx was much better as Max Dillon than as Electro, although it's hard to tell how much of anything he did as Electro. Dane DeHaan put in a convincing enough Harry Osborn [although I'm not sure how I feel about them bringing that character in as Peter's "best friend" when they hadn't seen each other in a decade]. And Paul Giamatti was almost unrecognizable as the Russian thug Aleksei Sytsevich. Sally Field continues to not really do it for as Aunt May, but I'll give her a pass, sort of, for that one scene with Peter about his parents.

Also, kudos for introducing us to the character of Felicia, whom I have to suppose is Felicia Hardy and the future Black Cat.

The only real flub of the movie is a stupid science thing they did during a discussion about spiders and how spiders have cells that can "self repair" while humans don't. If humans' cells couldn't self repair, we'd all die the first time we got a cut or a broken bone or whatever. Sure, they're trying to talk about the rapid-style healing/regeneration of, like, Wolverine, but they do it in a piss-poor manner that makes it sound like people can't heal from, well, anything.

But that moment aside, The Amazing Spider-Man 2 is a much better movie than its predecessor. This one has all of the emotional impact that the first one was missing, possibly because they are no longer relying on what we ought to already know about Spider-Man and telling us what we don't know about Spider-Man. Their Spider-Man. So, again, if you like super hero movies and lots of action, this movie is for you but, unlike with most of these kinds of movies, you might want to bring a tissue for this one.
Posted by Andrew Leon at 10:16 PM