The High Cost of Magic

I've mentioned before that I play Magic: The Gathering. Well, sort of. I mean, I sort of play. I used to really play, and if you want to read more about that, you can go here, but, these days, I only sort of play. 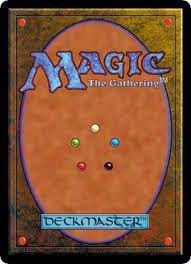 I just don't have the time or money to really compete, right now, but it is fun to go play a tournament every so often. However, in the short time I've been back into playing again, I've noticed a disturbing trend. Now, stay with me even those of you that have never heard of the game, because I have a point, so I will try to keep my technical talk as general as possible so that you can follow along.

Cards in Magic have a cost to put them into play. In general, that cost becomes higher the more powerful the card. So, for instance, a goblin, 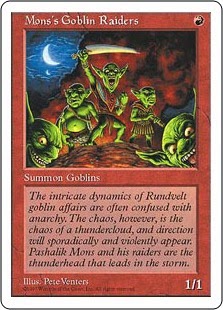 which is weak, only costs 1 to put into play while a dragon, 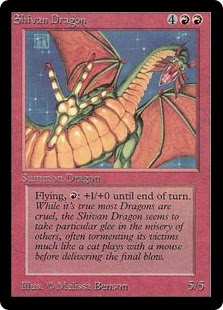 which is quite a bit more powerful, costs 6. In the past, these costs were basically unaffected by the cards rarity. In the above example, the goblin is a common card (easy to get) while the dragon is a rare card (difficult to get). But this wolf 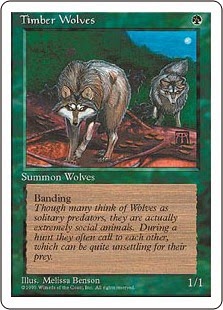 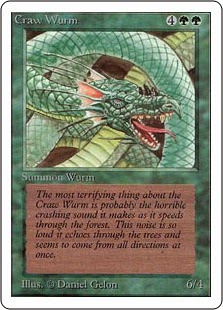 has the same cost as the dragon.

What this did for Magic was allow people to play at whatever level they could afford. You didn't have to own tons of rare cards. The rare cards allowed slightly more flexibility and some advantage but not an overwhelming advantage. The same Terror card, a common and cheap to cast, 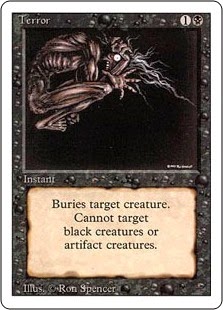 could kill a rare card as quickly as it could a common card. Basically, you could build a strong deck without having to have rares in it. In fact, I used to keep a deck built entirely of commons (with a few uncommons) around just to show people you didn't have to have the rares. People would bring their competition decks to test against my common deck (which always resulted in sales for the store I worked in when I would beat them).

This model of Magic was a good one. It allowed a broad base of players to play and to play on a fairly level playing field. You didn't have to own thousands of dollars worth of cards to be able to compete.

That model of Magic no longer exists.

Just within the last couple of years, Wizards of the Coast has switched to a model that lowers the cost to put rare cards into play. For example, this Loxodon Smiter 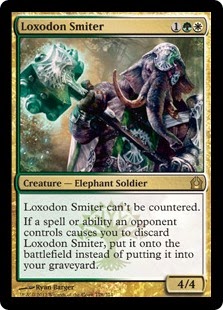 only costs 3 to put into play and he has some pretty fantastic special abilities. It's half the casting cost of the above dragon and wurm and nearly as powerful. This common card, not nearly as powerful as the Smiter, 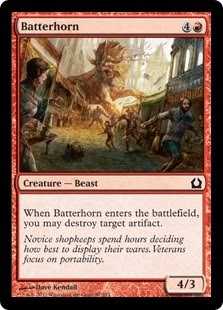 costs 5 to put into play. To which you might say, "There's still the Terror card," but, no, they took that card out of the game, so there is no card that will destroy a creature that's that cheap to cast. What you have instead are things like 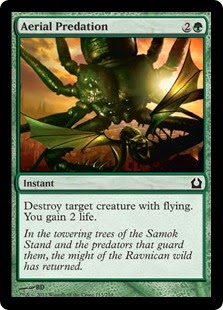 which costs 3 (as opposed to Terror's 2) and only works on flying creatures (but is, at least, common) or 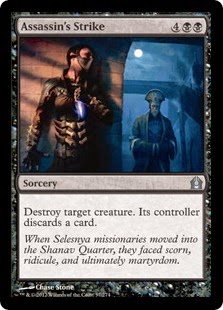 which costs a whopping 6 and isn't even common; it's an uncommon. Perhaps the best example can be seen here. Lightning Bolt 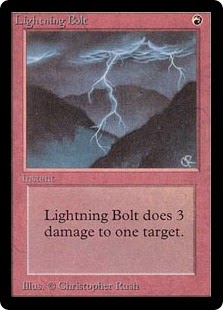 was a common card that could deal damage to a creature at a cost of 1 but has been taken out like Terror has. The closest to it is 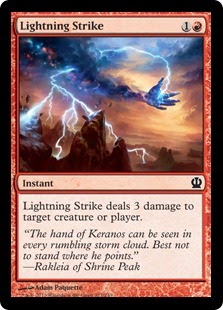 for double the cost, which may not seem like a big deal but, trust me, it is. And it's still not enough to take care of that Smiter from up above.

All of that to say that Wizards of the Coast has shifted the focus of the game from one that allows people of all financial means to play to one that favors the players with lots of money to spend gaining rare cards and the even harder to get, but even more powerful, mythic rare cards. 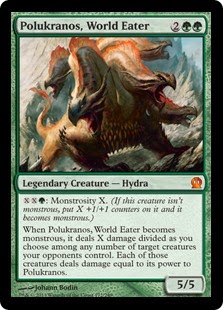 What this has caused is fewer players showing up to tournaments. I don't go more than once every couple of months, but even I have noticed it. And, after talking with some of the guys in the game shop that hosts the tournaments, player numbers are about half of what they were two years ago. What you end up with is fewer players spending money on packs and cards. Sure, those fewer are spending more money than they were before, and it may make up for the attrition rate of players for a while, but that can't last for forever. The end result is a strong but small player base where once you had a very large player base. In the end, it's bad for the game.

The cost of Magic, both in the game with the casting cost of the cards and outside the game on the wallets of the players, has become too high.

Of course, this kind of problem is not restricted to the guys at Wizards of the Coast.

When I was in high school, I was pretty big into the Xanth novels by Piers Anthony. 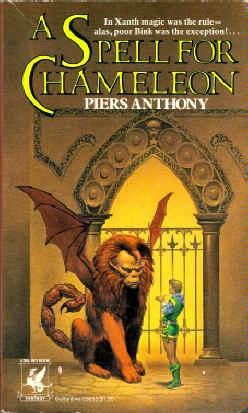 The series involved the use of puns. In the beginning, the puns were few, just added in as a bit of fun, but, by book four, Centaur Isle (get it?), the puns were becoming part of the story and, later, in such books as Isle of View (get that one?), the puns had eclipsed the story. The reason was a fan-based one. Fans of Xanth began sending in puns to Anthony, and he would work them into the story with acknowledgement to the sender at the end of the book. But he lost the story somewhere in doing this and lost readers like me that wanted that story thing to be involved. He was left with a loyal but small fan base and, although Xanth is still going on, there is no call for any other kind of writing work from Anthony because he has become just that one thing.

I think authors can easily be pulled into traps like this. Basically, they can focus in too much on writing just one kind of thing because that appears to be where the money is. They lock themselves into just writing fantasy or just writing romance or just writing... whatever because "that's what people want." Usually, by the time you've realized you've put yourself in a box, it's too late to get out. As Anthony says, publishers don't want anything else from him anymore.

David Eddings did the same thing after the success of his The Belgariad. Everything he wrote after that was just that same story over and over again for two decades because that's "what people wanted."

All of that to say (all of that because I wanted to talk about the whole Magic thing since it's something that I've noticed and am not happy with) that it's a dangerous thing to narrow your focus too much to only appeal to a particular audience. The more you narrow, the more people you will lose.