So here we are back visiting another book from my childhood. Here's the background:

I first read A Wrinkle in Time when I was about 10, 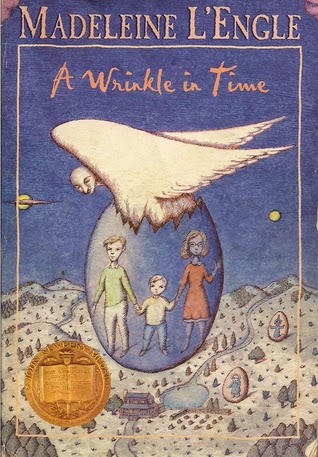 fourth or fifth grade; I loved it. The idea of a tesseract, a wrinkle in space and time, was just... it was amazing! I think, really, the book began and ended there. Okay, not quite; I also loved when they wrinkled onto the 2-D planet. And I think my friends and I tried to bounce all our balls in unison at least once or twice to mimic the kids on Camazotz. My nostalgia for this book says it's great.

At the time I read it, I didn't know there were more books and, then, the next book I got a hold of was A Swiftly Tilting Planet, the third in the series. I did my first oral book report on that book but, now, I don't remember anything about it. The book, not the report. The report went... poorly. It was my first lesson in public speaking, and I never let nerves get the better of me again after that. At any rate, I never read A Wind in the Door and didn't even know there were two more books in the series until recently when we were getting them for my daughter. So, see, I thought, "Hey, I never read some of these and don't really remember much about the two I did read, but I loved Wrinkle when I was a kid, so I'll just read them all now!"

Which may have been a mistake...

A Wrinkle in Time did not live up to my memories of it. Not even close. The book does a lot of things that I just can't stand, now, as a reader, although I can understand the attraction of the book to kids, and I would still recommend it for kids not yet out of middle school. It does, after all, have some amazing concepts in it; they just don't make up for the places the book fails me as an adult reader.

My biggest issue with the book is the withholding of knowledge. Specifically from Meg. It's one thing to withhold from the reader, but I'm overtired of the whole thing where the characters in books (or movies) who have information withhold it from those who don't for no good reason. And there is no good reason in Wrinkle. Meg is constantly asking questions, and Charles Wallace, her mother, and the Ws just don't answer her. Frequently, it's passed off as "there's not time for that, right now," but, then, they spend tons of time just not doing anything in which those questions could have been answered. If you don't want to reveal the answers to your character, don't have your character asking the questions.

Beyond that, though, there are too many other unanswered questions. [There will be spoilers.] Questions like:
Why do the "witches" care if Mr. Murry gets rescued? The vague answer in the book is not sufficient.
If the "witches" do care, why did they wait so long? Ostensibly, I suppose this is because he was finally going to "break," but I don't really buy that. Why wait that long?
Why didn't IT just take care of the children? There's no good reason for allowing them to roam around.
Why is Charles Wallace hanging out with the giant brain when Meg goes back for him? No one else is hanging around with the giant brain, so why is Charles Wallace even still there?
Why are the "witches" stealing blankets and messing around with an abandoned house at all if they are just going to leave at the end of the story? None of that stuff made any sense at all.

I could go on.

Another thing I have really come to dislike: the giving of "gifts" that will help the heroes but not telling them how to use those gifts. How dumb is that?
"Here's a red button. Only push it if you really need to."
"What does it do?"
"I can't tell you that."
"How will I know when to use it?"
"I can't tell you that."
So Meg's usage of the spectacles that were given to her were less used as a "last resort" than as a "well, I can't think of anything else to try."
As a plot device, this ploy is rather lame.

The last major issue for me is the rather arbitrary behavior of some of the characters. Okay, mostly Meg. Specifically, the scene near the end when she's mad at her father then suddenly isn't. After spending years working with teens (and just knowing about people) that's how absolutely no one behaves, especially teens. But it's the arbitrary behavior of the "witches" that bothers me most, because, really, none of it makes any sense.

Now, I can see the attraction of all of that for 10-14 year old. I think frequently their worlds do look pretty arbitrary, so they don't question any of these behaviors; I certainly didn't when I read the book at that age, but, as an adult, an adult that knows that there generally are causes and reasons for things, I was left unsatisfied.

Basically, reading this book now, it feels to me like a skeleton of a book. Like it was the draft that L'Engle didn't go back to to flesh out. Or, maybe, it was the need to keep it at an appropriate length (as deemed by the publisher) to be desirable for the intended audience. All I know is that it needed more for me, now, as an adult then it needed for me, then, as a kid. Which is a significant point since the book is aimed, generally, at middle grade readers. It does leave me feeling somewhat ambivalent about the book overall, though. I will be continuing on in the series, though, so I'll let you know how those go as I get to them.
Posted by Andrew Leon at 12:00 AM