A Wind in the Door (a book review post)

Moving on from my review of A Wrinkle in Time, we come to A Wind in the Door. 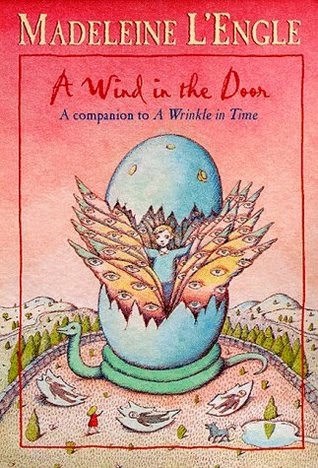 I never read this one when I was a kid, so I was coming at it completely fresh. And, at first, I thought it was making a difference in my reception of the book, because, at first, I was really enjoying it. The first third of the book was really good. I was impressed and everything.

Yes, there will be spoilers.

This one is two years after Wrinkle; Charles Wallace is in school and is having difficulties fitting in. He also thinks he's found a dragon in his brothers' garden. The first part of the book deals with the search for this dragon, and all of that section is interesting and enthralling. Including finding the "dragon," which turns out to be a cherubim. That spouts fire. I'm still not clear on why the cherubim spouted fire, but it did. We also meet Blajeny, a giant obsidian dude who is some kind of Teacher.

And that's where the book starts to fall apart. The first thing, which could be overlooked if it was the only thing, is that Calvin just happens to show up as Meg sneaks out to go looking for, well, she doesn't know what she's looking for. In fact, there's no clear reason why she sneaks out of the house. Here's the conundrum: It's after bedtime. Meg sneaks out, which is not the issue; the issue is that Calvin just shows up. Sure, he has his own reason for being there but, ostensibly, he should know that it's after the Murry children's bedtime, so why is he coming over to their house when Meg and Charles Wallace are expected to be asleep?

The next real issue is Blajeny. He's supposed to be a "Teacher," a term which is never really explained and, I suppose, shouldn't need to be explained except that he never teaches or does anything like teaching. What he does is announce to Meg that he is there to be her Teacher and that she will have three trials. So this is his method of teaching, to announce that she will have trials but, oh, he can't tell her what they will be or how to overcome them. He will, though, giver her the cherubim, Proginoskes, as a partner but, no, he doesn't know what the trials will be, either. This is another one of those tropes that I am overly tired of. And, well, how would Blajeny even know how many trials there would be if he didn't know what they would be, something he admits later. Basically, this was some ordeal he, some very powerful cosmic being, couldn't fix himself and needed Meg, a teenager, to do it for him.

Most of the rest of the book is torture. As soon as they get to the first trial, which is to determine the real Mr. Jenkins... Okay, hold on a moment. There was this scene in Wrinkle with Mr. Jenkins where he is questioning Meg about the whereabouts of her father. He seems to have an overly intense curiosity about it. Meg even wonders why Mr. Jenkins cares, basically, calls attention to the behavior to the reader, then... nothing. The character doesn't enter the book again, and I was left wondering what the heck that was all about. When he turned up in Wind, I thought, "Oh! We'll get to find out what Jenkins is up to" But no. Jenkins is up to nothing except being lame.

So, okay, Meg has to figure out which is the real Mr. Jenkins because he's been copied by fallen angels called Echthroi who want to X existence. But to start with, they want to X Charles Wallace. Yes, the "X"ing is how it is put in the book. They want to X everything. Why they copied Mr. Jenkins is never explained and has no logic to it other than a contrivance because Meg hates Jenkins but has been put into a position where she has to save him. What we get, then, is two chapters of Meg whining about how she can't do it and Proginoskes telling her she has to or he will X himself. They just kept going around and around that argument:
"I can't do it."
"You have to."
"I can't."
"Then I will fail the trial and will have to X myself."
"No, you can't do that."
"Then you have to choose." (Or, as they said in the book, she had to Name him.)
"I can't do it."
OH MY GOSH! Seriously! I needed two chapters of that! (More than 30 pages in  the edition I read (nearly 1/5 of the book).)

Not to mention that, again, the person (Blajeny in this one) provided who should be able to answer questions and explain what's going on and what to do and all of that fails to answer any questions and leaves them on their own to figure out what to do. Which, you know, sometimes is what you need to do with kids but not when someone's life is in the balance. It would be like coming up on a car accident and the ambulance is there, but the EMT tells you to take care of it instead then refuses to answer any questions about what you should do and, in fact, wanders off when you're focused on the guy bleeding out.

Mostly, I have found these books, so far, to be a place for L'Engle to dangle her ideas and philosophies with not enough story to really make the books worthwhile. Both books have focused on love as major plot device (the climax of the Wrinkle being Meg saving her brother by, basically, saying "I love you"). The message, then, of A Wind in the Door is that love is an action, not a feeling, and that's something I agree with, but I don't need 50 pages of anguish over it. I also don't need half of the book explaining and re-explaining "kything."

So, as I said last time, these books may be great for kids, but I'm just not being able to get into them as an adult. There are too many shortcuts and too many devices without reason and not enough answers both to the questions the characters have and the questions that I have as a reader. If you loved these as a kid, cherish that, but don't try to go back to them now. If you never read them, it's probably better to just not.
Posted by Andrew Leon at 12:00 AM