You're probably thinking right about now that the way to become a werewolf is pretty simple. All you need to do is go out and find one and let it bite or scratch you. 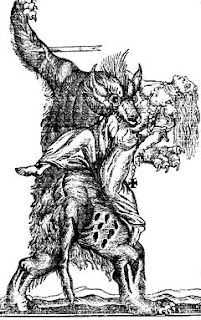 That would be incorrect.

Sure, plenty of books and movies depict it that way now, but that has newly been tacked onto the werewolf legend, probably due to its association with vampiric legends due to Dracula. Which is kind of interesting, because Stoker drew on werewolf legends and attached them to the vampire legends. Although it had been believed in Medieval Europe that you had to burn a werewolf corpse to keep it from rising from the dead as a vampire. So if you're looking to one day be a vampire, it appears that being a werewolf is a good start.

But, okay, if you can't become a werewolf from getting bitten, how do you become one? It appears that there are many paths to werewolfdom, and many of them are surprisingly easy to accomplish.

One of the best ways, because you can control it, is to simply wear a belt (or girdle) made of wolf hide. Putting on the belt would cause the transformation to take place, instantly and painlessly. Removing it would revert the wearer to human form. However, some sources said it wasn't quite that simple. Some said the strip of wolf skin, the wolf strap, had to come from the devil. Although you could still control the transformation, because the devil gave it to you, you could never rid yourself of the wolf strap.

Some legends say that you could become any animal at all by drinking rainwater from its footprint. Wereelephant, anyone? Or, you know, maybe find one of those stone dinosaur footprints and drink from that. Weretyrannosaur. One catch, I couldn't find anything that said how long these transformations would last, just that drinking the water would trigger them. I imagine they must wear off; otherwise, no one would have ever known they'd happened to begin with.

Other sources say that you can become a werewolf by sleeping outside in the light of a full summer's moon as long as the light is shining directly on your face. I suppose this must be part of where the full moon part of the transformation legend comes from. The sources implied that transformed human would return to normal at dawn. But these weren't permanent changes; you'd have to do the same thing any time you wanted to become a werewolf.

Still other legends claim that one would need to be cursed by the devil to become a werewolf. Or enter into an allegiance with him. Evidently, there was once a group of sorcerers that craved human flesh, so they entered an agreement with Satan to have wolf forms so that they could fill their craving. They were given straps so that they could control their transformations.

And other sources say that the werewolf has been cursed by God or Angels or, even, saints for committing terrible offenses. I'm not sure what constituted a terrible offense. But, then, still other sources say that werewolves are actually the servants of God in his battle against Satan. They are known as the Hounds of God and go down into Hell to battle demons and witches.

Oh, and some people are just born that way.

There you go. If you want to be a werewolf, you have a lot of options to choose from. Personally, I'd go with the wolf hide belt. Then, again, being a weredinosaur sounds pretty cool, too.

Notes:
1. During the Middle Ages, it was thought that werewolves did not have tails (you know, because people don't have tails), which was how you could tell a real wolf from a werewolf. To keep from being found out, werewolves would run with one of their hind legs extended behind them so that, from a distance, it would look as if they had tails.

2. In his book Fool Moon, Jim Butcher features werewolves. I appreciate that he didn't just go with the modern concept of were-ism being like a contagion. He incorporates many of the various werewolf legends into The Dresden Files, which I find a nice change of pace from most modern renditions.