How To Be... a Genetic Engineer

One of the earliest loves of my younger son was Pokemon (his first love was Star Wars at all of one year of age, but that's a story for another time). I suppose this was back around when he was four or five, although the exact age when all of the Pokemon stuff started is a little hazy. However, I do remember that he was, at first, disappointed to find out that Pikachus 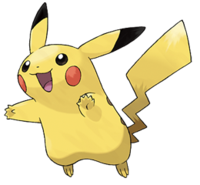 do not really exist, but that passed quickly into a determination to grow up and make one. With the way things are going, that may actually be a possibility by the time he is of an age to do so.

Genetic engineering, as we most commonly think of it, the direct manipulation of DNA by humans (not including selective breeding or mutagenesis), has only existed since the 70s, but we have come oh so far since then (check last year's post for some of the things we've already accomplished). The real issue is that, right now, we don't really know where we're going with it, and some people are scared of the field in its entirety. And, hey, who can blame anyone for being scared with all of the zombie fear? Genetically engineered diseases are at the root of many of these ideas.

Once you have the background knowledge you need, it's really just about finding someone willing to hire you on to work in a lab working on genetic engineering projects. Well, that, or taking that Dr. Frankenstein route and doing it yourself, which seems completely plausible assuming you had the resources to do it. Like I said, no one really knows, yet, where we can go with genetic engineering or what is and is not possible, so, maybe, my son will grow up and engineer his own Pikachu.
Posted by Andrew Leon at 10:08 PM