This post started out as my "A" post. No, really, it did, because I was going to do "assassin." However, everything I was looking up about assassins kept leading back to ninja, and who ever says, "I want to grow up to be an assassin"? No one I ever knew. No, everyone said either, "I want to be a ninja," or, "I want to be a ninja assassin." I think assassin is more of a subheading under a lot of other careers these days, anyway, meaning that you get trained to be something else, first, like, say, a sharpshooter in the military or a spy or, well, something and, then, end up using those skills to kill people.

Interesting fact: the term "assassin" actually has Middle Eastern origins. The Order of Assassins, founded by Hassan-i Sabbah, dates back to just before the First Crusade.

But what about the ninja? 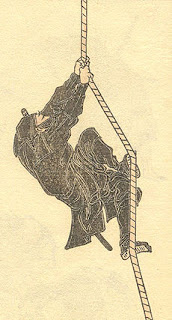 I don't want to get into an actual history lesson, here, so, to put it simply, the ninja--or shinobi, as they were called back in the 1400's--were a reaction to the samurai during a period of great unrest in Japan. The samurai were bound by strict codes of honor and combat and weren't free to... take care of certain types of business. The ninja (shinobi) came about as a result. They had no such codes and developed as covert agents using more unorthodox means: espionage, sabotage, assassination. A samurai would never assassinate anyone. Contrary to popular opinion, the ninja were not strong in direct combat skills, generally speaking, and confrontation of that sort was only a last resort. In short, the ninja had no honor and were outcasts from the rest of Japanese society.

So the first thing you need in order to be a successful ninja is a questionable moral compass. You have to be willing to, well, kill people... behind their backs, so to speak. Sneak and break into places. Steal. Spy. Wait... this is sounding kind of familiar...

You need to learn the art of silence. One source I found said simply, "Practice walking quietly." In a broader sense, you can't go around telling people you're a ninja. I actually had a friend in high school who bought himself a "ninja suit" and told people he was a ninja. That's how you know when someone's not. But, as to being quiet, as a ninja, you may need to stayed concealed for days at a time, so silence is a must.

You have to learn how to think ahead. Plan your escapes in advance. The ninja have been referred to as ghosts, and this is why. A successful mission can rely on a planned escape route. And make sure you have more than one planned.

Be a master of your whole self. It's no picnic keeping concealed for days at a time, so you have to be a master of your body. Also, remember that no one should know you're a ninja, so you can't go showing off, which may mean walking away from a fight in disgrace rather than demonstrating your skills and kicking some ass. See, a samurai would never walk away.

As for the killing, you have to be able to kill people in secret. Knowing about poisons is a strong skill set for a ninja. What each poison does for whatever effect you're going for. Should it be painful? Should it look natural? Should it scare other people? Long distance ways of killing are also important, so things like the bow and arrow or the blow dart (or, in today's world, a sniper rifle). Sometimes, killing someone would mean hiding for days in a toilet, so, well, be prepared for anything.

You know, all of these things kind of sound like being a CIA agent, so, maybe, that's the best way to be a modern ninja.
Well, that or joining Alex's ninja army. Yeah, that one sounds a lot safer. And much less likely to have you hiding in sewage for three days. So that's my advice; drop by and see Alex and see if he has any spare pajamas for you.
Posted by Andrew Leon at 11:10 PM