The word "knight" conjures up all sorts of images, but I bet the one that charges to the forefront is something like this: 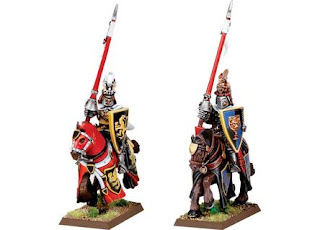 You know, that whole "knight in shining armor" thing. But the ways of becoming a knight have changed through the years.

For instance, it is both easier and harder to become a knight today than it was, say, 1000 years ago. Rather than learning to wear armor and ride a horse and fight with swords (which all sounds rather difficult and time consuming), these days, you only have to make a significant contribution to British society to be knighted. Somehow, the learning to wear armor, ride a horse, and fight with swords sounds easier. And more dangerous.

But, since I know you are all thinking about shining armor and all of that, we'll take about that kind of knight and not Sir Ian McKellen or Dame Maggie Smith.

So what did it take to be a knight all those long years ago? Well, let's look at that on the historical continuum.

The word originates from a word meaning servant, which eventually came to mean a military servant following a king. So, at that time, about 1000 years ago, all you needed to do was pick up your weapon (which probably wasn't a sword) and follow the king or warlord or whomever into battle and you were a knight. Pretty easy. You didn't even have to know how to fight, which was good, because most of those guys weren't actually trained in combat, not like we think of it.

Within a few hundred years, during the Hundred Years' War in fact, the specific sense of the word had changed to mean a mounted heavy cavalryman. These guys did know how to fight and were trained to both wear armor and wield a variety of weapons while mounted, so the meaning of the word had the connotation of a skilled warrior. By about 1300, being a knight was a rank of dignity that was bestowed because of martial prowess. To be a knight was something that was earned, and it wasn't easy. I think this ideal is probably what most people think of when they think of knights, although we weren't really to the "shining armor" part quite yet.

But the word wasn't finished changing...

See, to be a knight you had to have a horse, a warhorse, in fact, that could carry a man in full armor and often wear armor itself. These were not cheap, so, basically, only the wealthy, the landowners, could support owning a warhorse. By 1500, the term had already begun to change to be an honorific for landowners. Yes, they were still required to be able to sit a warhorse if they needed to go to war, but they weren't necessarily good fighters. Actually, it's slightly more complicated than that...

If you had money and owned land and had horses, you could afford to have your sons taught to fight, so it was pretty normal that the wealthy had some fighting skills that placed them above the masses, but they no longer had to demonstrate those skills to be a knight; they just tended to gain the skills by the fact that they were knights. Some of them were very skilled, but, mostly, it was a title of position, not ability. And it was around this time that what we think of as the "knight in shining armor" really came into being, because that was the time period when armor technology really began to take off. 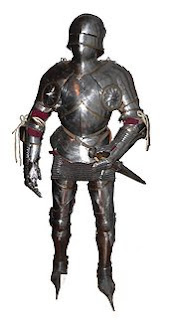 So there you go, many different ways of being a knight. Of course, you can't really be a knight in shining armor anymore, not in any real sense. However, you can always join the Society for Creative Anachronism to get a taste of what it would have been like.
Posted by Andrew Leon at 10:15 PM