Getting the Wrong Message

We live in an age of t-shirts. They're like membership badges. You wear a shirt, and people comment on it, and it let's you know whether or not they're in your club. Unsurprisingly, I have several Star Wars t-shirts. I used to have a lot more, but most of them have been retired. Okay, so, yeah, I still have them; I just don't wear them anymore, because an awful lot of them are 20 years old and not really fit for wearing anymore. A have a couple of Sandman t-shirts, I have Animaniacs and "Pinky and the Brain" t-shirts, and I have this t-shirt: 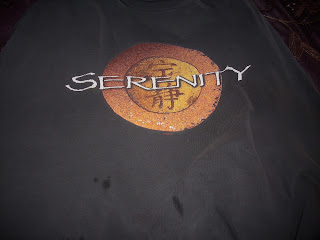 (I also have a lot of other comic book related shirts, but I don't really have time to list all the shirts I have!)

I imagine that emblem is familiar to most of you out there, but, surprisingly, it's one of the least recognized shirts I have. It's also one of the most commented on shirts I have. Whedon fans will almost always say something, but, frequently, people who don't know anything about Firefly will say something like, "Nice message. We could all use more serenity." I just sort of nod and grin and say, "Yeah, we could," while thinking something like "if you only knew."

When I was in college, I was in this writing group. A lot of (pretentious) poetry was batted around during the meetings. One of the rules was that you were not allowed to claim your own work. We were also encouraged to comment on our own work so that no one would know it was ours by our silence. Non-committally comment, of course. That was hard for a lot of people, so most everyone just sat silently when one of their pieces was being read and commented on.

One night, there was a particular poem that was read. I don't remember what it was about, but, evidently, no one was getting it. The author of the poem was trying to restrain himself, but I could tell he was getting frustrated, and he was really fighting with himself to keep from blurting out how wrong everyone was. Including the professors. One professor in particular. Awkwardly enough, I was the one that caused him to explode, but it was because I got it right. I gave my interpretation, and he slapped the table, jumped up, and pointed at me yelling "Yes! Finally! Someone gets it!"

I felt kind of bad. Bad in that it was my fault he lost his cool. It was kind of weird that he lost it over his message getting through when he'd managed to hold it together through everyone getting the "wrong" message. But that's kind of the point: there is no "wrong" message. There is a failure to communicate the intended message, but it's hard to say that a message pulled from a reading is wrong. Unless, of course, you're Barney Stinson rooting for the bully in The Karate Kid. Barney just gets it wrong, but it's not like that for most of us.

No, most of us carry away a valid message even if it isn't quite the one the author intended, and you know what? That's okay. None of the people giving the "wrong" interpretation of the poem that night had messed anything up; they just didn't quite understand the point the author was trying to make. That doesn't mean those other points weren't there, because we weave into our writing things we have no idea are there until someone else points them out to us. And that's okay, too. That's why other people can see things about us that we can't always see, and it's why we can learn about ourselves through other people and the way other people read what we've written.

You know what else? I don't think Joss would be upset about people coming away with a message of serenity because if the t-shirt based on his movie. I think he'd say, "That's okay."
Posted by Andrew Leon at 10:57 PM