Remember that one teacher?

You know the one, right? That teacher that everyone dreaded getting. The one with the hard rep. The one you couldn't make excuses with or sluff assignments. The one that gave you nightmares...

There were only two types of students in that teacher's classes, the ones that made A's and everyone else. The ones that made A's were few, and no one made B's. You either worked your... bottom off or you did poorly. That's just how it worked. You know, except for that one kid that just made good grades without breathing, and everyone hated that kid. You're pretty sure even the teacher hated that kid but couldn't do anything about it.

I think I'm that teacher. Not at school. The kids love me at school. Even though my creative writing class is extra work for the kids (because it's an elective), the students frequently tell me that it's their favorite class. No... I'm that teacher here. Sort of. At least, that's the rep I think I'm getting for all the grammar stuff and my reviews. People are starting to ask me to not read their stuff because they're scared of the review they might get.

Of course, I also have more requests to read than I can keep up with, so I'm sort of okay with the requests to not read.

But here's the thing:
It's not the bad grammar, improper punctuation, and lack of editing that bother me. Not in and of itself, at any rate. If you're doing your best, you've sought out the best help you can find or afford, and you're trying to improve, I can overlook some bad grammar and splotchy commas. It's the people that shrug it off as not important that bother me. That's when  the bad grammar and lack of editing get me all riled up.

The thing that makes me most upset is when the author has the attitude of "hey, I wrote a book, and you should worship me for that." That bothers me. I mean, it really bothers me. And I find that a lot more than you'd probably like to believe. That attitude of "why should I worry about grammar, punctuation, and editing? Those things aren't important, because I wrote a book!" And I want to respond with something like "well, actually..."

It's the attitude that writing is all subjective anyway and therefore doing it correctly isn't important that bothers me. When I see a manuscript out for public consumption that looks like something one of my middle schoolers handed in, and I'm correcting their stuff and helping them to get better, but the author of said manuscript blows off the poor writing as "just my opinion," well, that makes me mad. Because, honestly, that attitude is wrong.

Here's the truth. Are you ready for it? I think it's a hard truth and one a lot of people have an issue with and don't really understand. The TRUTH:

Stories are subjective; writing is not.

It's that simple. Whether I like your story and how you tell your story is completely subjective, but, whether the writing is good or not, well, that's something else entirely. The writing is something that can be graded, and I know, because I do it. Actually, to some extent, stories can be graded, too, or, at least, subjected to objective measures like "hey, you have your character in two places at once, right here" (yes, I am (still) talking to you Snow Crash).

[Oh, and I have a good example of this coming up in a near future review. A story where the writing is very good, perhaps excellent, but the story just never grabbed me.]

The idea of writing being subjective is, honestly, just an excuse to excuse poor writing, and everyone has bought into it to such an extent that that part of it can't be seen anymore. Before I go on, there's a lot here that could be said about agents and publishers and all kinds of stuff, but I'm not talking about any of that. What I do mean is that people, when told their manuscripts need work, fall back on the whole "it's all subjective" thing. That, or they revise every time someone says anything, but they just keep changing the story rather than dealing with the underlying grammar issues.

[Okay, I need to insert here: when you're told that your manuscript needs work and there are a bunch of story suggestions included, that is subjective, because that person is just telling you what your story needs for that one person to like it more. However, when you're told your story needs work and there's a list of grammar/punctuation issues that need to be fixed, that's objective. That's stuff you should pay attention to.]

Before I get off on about 20 different tangents, I'm just gonna stop. This is a complicated topic and it changes from person to person, but, basically, if my rep is becoming that of some kind of grammar fascist, I suppose I'm okay with that, because there's not enough attention on proper writing, right now. Not from indies, certainly not from small publishers (who often have editors with no better than a high school diploma if they have editors at all), and not even from larger, more traditional publishers who have been canning editors to cut back on costs and increase profits.

All I really wanted to say, to clear up, is that I'm not so hard about all of this as it comes off. At least, I'm not so hard on the people that care, are trying, and actually want to improve.

However, I have no sympathy at all for those people who just blow it off as a non-issue or a subjective issue. If you want to have an analogy, and look! I do, it's sort of like a fireman that decides he's only going to put out fires that happen in bathrooms and children's bedrooms. The other fires just aren't important. They may not even be there, you know. Maybe that person wanted that fire in the middle of his living room floor. For roasting marshmallows, you know. Or, maybe, that stove top fire is supposed to be there, like for roasting a pig. It doesn't matter how much work that fireman puts into putting out the bathroom fire, the house is still gonna burn up.

And NOW on to other things!

Friday will be the free release day for part five of Shadow Spinner: "Part Five: The Police Car." Part five is the reintroduction of the Man with No Eyes: reintroduction because there was this post way back when that had him in it (and that exact scene from the linked post didn't actually make it into the book), and, also, reintroduction, because I posted this stuff a long time ago when I was first writing all of it. Anyway, all of that to say, well, be prepared for Friday, but, also, I want to give you a peek at the cover for part five, because it's amazing! 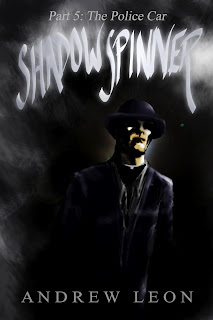 Drop by and tell Rusty what an awesome job he did!
Posted by Andrew Leon at 10:33 PM