Before Ever After is Samantha Sotto's debut novel. Samantha was one of the first bloggers I met, and she's a 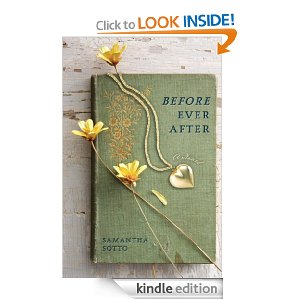 Doctor Who fan, which has nothing to do with anything other than that I tend to like people that are Doctor Who fans. At least, I haven't yet met a Who fan I don't like, although you don't need to be a Who fan for me to like you. It just makes it better. But I digress...

Samantha is one of those tiny percentages of authors that get picked up by a big, old traditional publisher with their first book. Normally, I would start with the technical stuff, but, having been edited by a big, old publishing house, there's not much to talk about there. Okay, there's nothing to talk about there. Which is not always the case, but it is in this case (for instance, there were editing issues with Snow Crash; I just didn't bother to talk about them because there was so much else to talk about). I didn't notice even a misplaced comma during the whole read. Not that I was looking, but those commas like to jump out and try to poke you in the eyes with those little hooked tails, and I didn't have to even swat one away while reading Sam's book.

In fact, the whole book is just well written. It's clever. It's witty. It has great prose. From a qualitative standpoint, this is a great first novel. It even has a story that is interesting. I mean, it's interesting beyond the tension of "will boy get girl?" See, it's not just a romance; it's kind of a sci-fi romance.

But this book is the reason for many of the posts I've done this past week, because this is one of those books about which I would say, "This is good, but I didn't like it." And it's not that I disliked it; I just didn't like it. (See yesterday's post for more on all of this.)

The first thing that posed a problem for me is the style in which the story is presented. Not the writing, because  the writing style is (mostly) fine. As I said, Sotto is witty and clever and the writing is snappy and fun, so it's not the writing. The issue is one of flow... Let me explain:

I'm a chapter reader. That means I like to sit down and read until the end of a chapter where I have a clear cutting off point. It's not that I can't stop in the middle of a chapter, I just prefer not to. Books that have tremendously long chapters can wear on me, because I don't always (in fact, almost never) have time to sit down and read a 30-page long chapter. My comfort zone is probably in the range of about 12 pages. Unless! see, there is an unless, the author has scene breaks within long chapters, and I'm fine using those in lieu of getting to the end of the chapter.

Before Ever After actually had the opposite problem: too many scene breaks. I've never actually run into this before, aesthetically speaking, but reading the book was almost like looking at a series of snapshots from someone's vacation. Someone you don't know very well, at that, and don't have a lot of interest in. On top of that, the photos aren't really of interesting things but just of the people sitting or standing or eating and, every once in a while, there might be some landmark in the background, but, mostly, it's just lots of pictures. Now, this is kind of a theme in the book, the photo taking, so, if the author wrote it this way deliberately, it's brilliant, but I still had a hard time getting into the flow of the story because of it. Often, there would be multiple scene breaks on the same page, and it made me feel like I could just put the book down at any time, so I rarely read more than a couple of pages at a time. The result of that was that I spent six months reading the book, which was just too long.

Like I said, this is something about the way I read that got in my way and is totally subjective. It says nothing about  the quality of the writing.

Now, the book is loosely divided into three sections:

In relation to all of that, I liked the historical passages the best. They tended to be longer (fewer scene breaks). I don't know if I just liked those bits more or if I was able to get into them more because they lasted longer, but those were those most interesting to me.

Now, remember the other day when I was talking about David Eddings and I told you to remember the bit about clever, witty dialogue? Well, this is why. The present day characters (I'm including both the "Now" and the "Five years ago" characters, here) were all too witty and clever for me. That's kind of a problem for me and, also, probably my own hangup, and it may go back to Eddings. Maybe, if I never read Regina's Song this wouldn't be an issue. I don't know. What I know is that during almost all of the conversations, I felt like I was back in that book with all the characters trying to outdo all the other characters with their snappy patter, and it was distracting to me. It also felt unrealistic, because, even though we all like clever banter, most of us can't sustain it. It comes in fits and bursts and, usually, the witty comments don't occur to us until well after the conversation is over, so the fact that these characters seemed to always talk in witty banter made me roll my eyes a lot. Even Shelley has internal dialogue that is full of wit.

But it is witty! And clever! And I like witty and clever! It was just too much. Again, my own subjectivity, because, objectively, it's good writing. Any isolated passage you pull it will be good writing.

In the end, Before Ever After feels a bit like lobster to me. Or crab legs, because I did the same with both, but I think lobster makes a better example. When I was younger, I always thought I should like lobster. Not that I should but that, being me, I ought to. I like shrimp. I like crawfish. I ought to like lobster, too, right? But any time I tried it, I just came away thinking, "I really didn't like that." But I spent years trying it every time there was an opportunity to do so, because, you know, I ought to like it. Finally, I had to just admit to myself that I didn't like lobster.

Before Ever After has everything in a book I ought to like. Objectively speaking, it's a good book. It's well written. It has an interesting plot that, while not entirely unique, is presented from a perspective that I haven't seen before. It's witty and clever! I ought to like, but I could just never get into it. I do think it might make a really good movie, though, as long as it wasn't trimmed down too much.
Posted by Andrew Leon at 1:52 PM

Email ThisBlogThis!Share to TwitterShare to FacebookShare to Pinterest
Labels: Before Ever After, David Eddings, Samantha Sotto, Snow Crash, writing