Way back at the beginning of the year, I did a review on a book by the guys over at A Beer for the Shower. It's a good book, so you should all click the link, read the review, and go buy the book. But that's not what we're here to talk about today.

Today, we're here to talk about the first solo release of the Brandon half of the Beer team, Chasing the Sandman 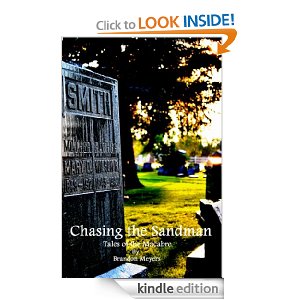 This is a collection of short stories that Brandon has written over the years and finally collected into one place. As such, I mean, as such that it is short stories, I should probably say right here at the beginning that I'm not the biggest fan of short stories. Which is not to say that there have not been some that I've really enjoyed or even some that have been very influential in my life, but, mostly, I just feel like there's not enough to them, so I tend to avoid short story collections. It's also why, I suppose, that I don't really write short stories either. What I think is going to be a short story when I start out always becomes something bigger than that (The Evil That Men Do is a good example).

Now that everyone is expecting me to trash the book, let's get to the technicals. As is generally the case with independently published books, this one could have used an editor; however, it wasn't too bad. Other than  the repeated issue with the comma after the conjunction with an independent clause following (my current peeve), there were no consistent errors. Just the occasional typo and left out word. All in all, it's a pretty good job that would say is a B. If not for that one comma thing, I'd say a B+ to an A-, but, then, there's the comma thing. That's probably a bigger issue for me than, well, pretty much everyone else, though (and I have a whole post about commas coming up; won't that be fun!).

But let's look at the book itself. Great title, right? I think it's a great title. My only issue with it is that it didn't seem to have any relation to the stories within the book. Often, with a collection like this as with the title of an album, the title will have something to do with a theme for the stories or with one story  in particular. There are no stories with the same title nor is the line used anywhere, so, unless I missed the theme, it's just a cool title. I'm not sure how I feel about that, although I'm sure it won't bother a lot of people. That's probably just me and my hang up with titles, but you can blame that on Samuel Delaney.

Jumping into the book, though, there is a lot of good to be said about it. Most of the stories are quite good with a twist that you can see coming but can't quite figure out. It makes them interesting in a way that most things of this genre are not. In fact, I'd love to go through them individually, but I don't think I could say anything of substance about them that wouldn't give away more than you'd want to know, so I'm not going to do that.

"Runaway Train" is unusual and sad. Sort of a unique perspective.

"Spirit House" is great even though I saw where it was going. But, see, it's one of those that I really wanted to be longer. I felt stifled by the shortness of it.

"Spirit of Christmas" is one where you think you know what's going to happen but the author pulls one over on you. You know there must be some twist coming, but you just can't figure out what it could be, and, then, when it happens, you smack your forehead. Brilliant!

Amidst all the horror slips "Into the Deep," a great little sci-fi piece that hints at a lot more. There's a bigger story there, but the one that's told is a good one.

"Seeking Shade" is great. I probably have a particular fondness for it due it's shadowy theme. There are some interesting things going on there and more to be told, I'm sure.

All of that aside, the story I liked most, "Spilled Ink," was also the one I was frustrated with. It's a great example of what I think of as a story that's too short. It's a great idea and well written, except the author makes a couple leaps of logic that I have to assume were made to the story an acceptable length, except that I would much rather that it be twice as long or three times as long to get all the story in there rather than have it be whittled down. So I think it's a great story, but it's definitely too short.

As is the last story, "Denatured," although I didn't like that one as much. However, I might have liked it a lot more if it didn't fee so sparse. The ironic thing about that is that I think "Spilled Ink" and "Denatured" are the longest stories in the collection.

With 21 shorts, there were only a few that I didn't care for at all, and, I think, that's saying something. Generally speaking, for me, in a collection like this, I'd only be finding a few a actually liked, and I'd be dismissing the rest as inconsequential, but this whole collection, for the most part, really kept me going.

If you like horror and suspense, this is definitely something you should check out. You can see hints of the humor and wording from The Missing Link in here, and that, to me, is very interesting. Interesting in that I can see how the Brandon half of Beer works with the Bryan half to make their stuff work. But, again, that's probably just me. Overall, I'd give the collection a good B hedging to the higher side of the B. The stories are definitely above average and do a good job of defying expectations. You go read it and let me know which ones you like best. That's kind of the most fun with short story collections anyway. Especially if you love one that I hated. Okay, so I didn't hate any of them, but, with 21 stories, there have to be a few on the lower end of the scale.

And remember to come back on Monday!
For the FREE! release of 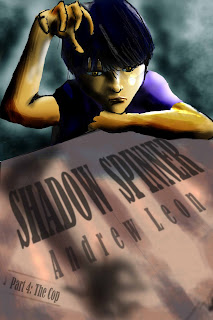