My daughter and I have been out picking blackberries again. Over the last few weeks, we've had three cobblers, and, OH MY were they awesome. Two of them were straight up blackberry cobblers, and the other was a blackberry-peach cobbler. Oh, the goodness. We even had homemade vanilla ice cream with the first one. We need to get out there at least once more before there quit being any blackberries to pick, but this past week has been too busy, and it doesn't look like that's going to change in the next few days. We want to make homemade blackberry ice cream, though, so I better figure out how to make it happen.

Anyway... All of this discussion about revisiting old topics got me to thinking about how the blog has changed since I started writing it a year and a half ago. I mean, back then, I would never have believed that I would spend any amount of time talking about grammar and punctuation. How boring is that? Didn't we want to escape school because of that stuff to begin with? But it's important, and there is an obvious lack of discussion about it if you spend any amount of time looking at independently published manuscripts.

I also had no idea how important reviews and honest reviews would become to me. There needs to be a lot more talk about that stuff, but, at least, that discussion is happening, especially with the (somewhat) recent news of authors buying hundreds of fake reviews to boost their exposure.

Still... it makes me kind of nostalgic for some of my older posts. My blog is not the same blog as it was back then, and it's hard to write those same kinds of posts these days. My mind just isn't in the same place, now, as it was then. Kind of like not going back to crawling after you've learned to walk. Except, in writing, it's like learning to walk over and over again. And over and over again. And again. So I've decided to start linking back to some of my more favorite posts from time to time, especially on Shadow Spinner release days. That seems like a good time for that to me. So, today, I encourage you to hop back in time and read the Blackberry Writing post if you weren't around to see it the first time. [And feel free to comment there, too, if you'd like. Just because it's an old post doesn't mean you can't comment!] 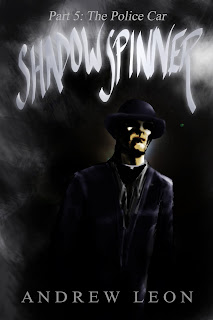 Today is the big FREE! release of "Part Five: The Police Car." Did I say FREE!? Because it's FREE! So, yeah, you really have no excuse not to go over and pick it up. Of course, you might say, "But I don't have the others." Okay, well, to help you out, "Part Four: The Cop" will also be FREE! today. Sorry, but you're kind of on your own with parts 1 - 3. Amazon only gives me so many free days per quarter, and, as much as I'd like to make these FREE! all the time, I just can't do it. Believe me, I tried. So, to recap:
"Part Five: The Police Car" is FREE! Friday, September 21 and Saturday, September 22.
"Part Four: The Cop" is FREE! Friday, September 21 only.
This installment marks a turning point in the story. The new cover is a clue.
You should also pop over to Briane Pagel's blog to see what he has to say about Part 5, specifically,  and Shadow Spinner in general. I can't help including a couple of quotes here, though:
"...the first five chapters so far have less in common with Potter or the Pevensies than it does good Stephen King."
"I'd say Leon is reinventing the book, but really what he's doing is reintroducing the book to us..."

I didn't put him up to that. I promise. Makes it hard for me not to glow from the praise, though, which would be awkward for going out in public.

Also, because I've been meaning to for a while and still haven't put up a link on the side, you can find  me over on Goodreads here. Really, I'll get to the side link... sometime.

One last thing:
This is not precisely a follow up to stuff from my A to Z posts, but it kind of is. NASA is working on faster than light travel. I don't mean this in a purely theoretical sense either. There are actual laboratory experiments happening. Read the article here. Between this and the whole quantum communication thing, interstellar travel could be here within a generation or so. Boggles my mind!
Posted by Andrew Leon at 9:49 PM