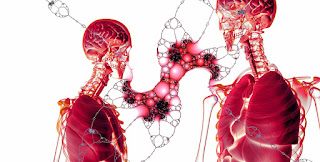 Philosophers have been debating the meaning of life for... well, for longer than there have been philosophers. It was probably this question, in fact, that birthed philosophy. What is existence and what does it mean? What does it mean that "I am"? All of which led to existentialism, which is not exactly related to the existential crisis.

And none of which is related in any way to any time a high school student says, "It's, like, so existential, dude."

While existentialism may have to do with existence and what it is; the existential crisis has to do, specifically, with the meaning of that existence. "Does my life have meaning?" or some variation of that question. Maybe a better way of putting it is, "What's the point of all of this?" Honestly, it's not a bad question to ask, though it may be the cause of so many mid-life adults suddenly finding themselves expounding on the virtues of their childhood religion; here in the USA, that would be "christianity." They can't find any internal meaning to their lives, so they are left with having to rely on an external meaning, false though it may be (it is). For most people, a belief in something false is better than no belief at all (as expressed in the horrible move The Life of Pi).

But, if it's a good question to ask, what, then, is the problem?

And there are sooo many problems...
but I'll just mention two:
1. The inherent violence involved in the internal conflict.
2. The tendency of those who have "achieved meaning" to try to force that on everyone else.
oh, and maybe
3. The attempt to find an answer to something that is essentially unanswerable. Because, face it, this is not a math problem or, if it is, it's the kind where each individual is his/her own variable arriving at a different solution when you plug the person into the equation.

While not every midlife crisis expresses itself in the way the one I spoke about in part one of this series did, it is certainly a good example of the cliche mid-life crisis. Something only becomes a cliche by being, essentially, common. So common in fact that when my dad had his own mid-life crisis which just so happened to correspond with the need for a new car for my family, my mom said, "He better not get a red one." He did, of course, get a red one. Not a sports car, mind you, because we couldn't afford anything like that, but the sportiest red thing we could afford. A Hyundai. heh

Going out and buying a red Hyundai may not sound "violent," but at the time, Hyundai was a very new car company so, actually, this was risky behavior. It was as risky as my dad could afford to be and, probably, more money than my parents could easily afford since it was a brand new car and not used. It was the same behavior as the guy in the last post, just on a much lower level.

The need to prove or derive that one's life has or has had meaning must be maddening. Maddening to the point of insanity. Not actual clinical insanity (though maybe it should be?), but enough to make people do things they previously would never have considered. And you can't talk to these people about their behavior because it's all unreasoned behavior. You can't talk reason to people acting on their emotions or on their instincts.

It's difficult, here, to not get bogged down in all the minutia involved in all of this, but this is only a blog post, not one of the myriad of books that have been published dealing with this issue. Anyway...

I think, right now, in the US, we're caught up in the conflict between these two questions. On a national level. It's the existential crisis of the American soul:

"Hey, look at all of this stuff I've missed out on because we (the USA) have been so busy being the responsible one and taking care of other countries and other people! It's my turn! I want mine! Fuck everyone else and let them burn! Let the whole world burn for all I care, because it's my turn and I want what's rightfully mine!"

It's irreconcilable. Unfortunately. Because you can't reason with the people who suddenly find themselves in a position where they need to "feel" alive. You can't explain to them that if they continue to do dangerous stunts on dirt bikes or cliff diving or whatever that, at best, they're going to get seriously injured and, at worst, they're going to get themselves and, possibly, others killed. They... don't... care.

So, in essence, we have an unresolvable conflict of interest. Or, at least, one that I can't see a resolution for. What I know, all I know, is that enough is enough.
But more on that next time...

If you enjoyed reading this post, please share it.
It's not hard, just a couple of clicks.
Thanks!
Posted by Andrew Leon at 12:00 AM