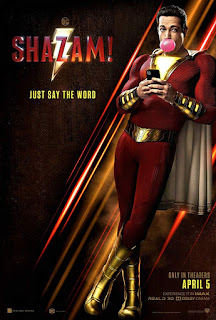 Before I get into the nitty gritty of this review, I'm going to say two things:
1. SHAZAM! is good. It's fun.
2. It's by far the best DC movie that Warner Brothers has been able to put together.
So let me go back to point one: SHAZAM! is good. Not great, not even very good, just... good. If I were ranking all of the Marvel (MCU) movies, I'd probably put Iron Man 3 at the bottom of that list; SHAZAM! rises to about that level. Put another way, it's around the level of most of Fox's X-Men movies. Not the best X-Men movies, just the bulk of them. Like definitely better than the dumb Wolverine origin movie.

It feels somehow appropriate to me that the only movie Warner Brothers has been able to pull off with a solid story (since Batman Begins) is with a character DC stole from an independent comic publisher.
But that's not a story for this post, and one you can look up for yourself if you're so inclined.

As with most DC movies these days, they're a little sparse on the origin side of things. Not with Billy Batson, per se, but with everything else. Mostly with anything and everything to do with The Seven Deadly Sins. There's no explanation provided as to what these are other than that, basically, the previous champion, some thousands of years ago, let them out of a box all Pandora style because he failed to be pure of heart. But, without a religious context, none of this make any sense, and they don't provide a religious context other than "Wisdom of Solomon." [And I have to say, if the Wisdom of Solomon is supposed to be one of Captain Marvel/Shazam's super powers, they really don't put it to good use.]

Then there's the wizard... Um... Why? I mean, not why is there a wizard, but why all of it? Why is he the last of seven; meaning, why didn't the wizards do anything about replacing the wizards as they began to die off? How did he come to be the last one? That seems more than a little on the stupid side. And I'm assuming there are seven wizards to stand opposed to The Seven Deadly Sins but, again, why? None of this is explained. Also, he's goofy. It's good that he wasn't in more of the movie.

However, in most ways, the actors make up for the deficits in the story. Zachary Levi is Chuck but on a more epic scale. He's perfect for the role, and it may be DC's first real bit of "nailed it" casting. Well, I think Ben Affleck is pretty spot on for Batman, but I may be in the minority for that. Asher Angel is also great as Billy Batson, though he plays Billy a bit more rough around the edges than Levi plays Shazam. Levi certainly brings a lot more "wide-eyed innocence" to the adult version of Billy than Angel brings to the 14-year-old version. But, you know, that's fine. They were both enjoyable to watch.

Mark Strong is fine as the villain. The character has no real depth, so it's not like he had to do more than just be menacing. I don't think anyone else could have done anymore with the role than he did. Well... Maybe Nicolas Cage; he has a certain kind of crazy that might have gone well in the role.

And not be spoilery, but look away if you don't want to be spoiled.

I think the biggest failing of the movie is the ending. DC/Warner Brothers seems to be intent on having huge mega-battle endings. Like ending Wonder Woman with a battle with the God of War. It was an unnecessary jump that I think hurt the film. And, so, like that, SHAZAM! ends with a battle wherein he creates the whole Shazam family. The movie does no real setup for it, and it ruined a confrontation that should have come down to Shazam against Dr. Sivana. There was no need for the too large battle with all of the Sins and the added... shazams? It didn't make the ending better. It was just added muddle.

But, you know, all of the stuff after the beginning of the movie and before the ending is great! Don't let it sound like I thought it was a bad movie. It wasn't. It was totally fine and enjoyable and worth seeing on the big screen if you want to see it. It's a step in the right direction for DC. It's small, but it's a step.
Posted by Andrew Leon at 12:00 AM