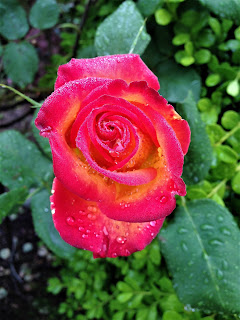 I spent a summer during college working for a flower shop. Mostly, I did deliveries, which was actually pretty fun. Back in those days, I really enjoyed driving. When you're 20, there's not much better than cruising around with your music blasting and singing at the top of your lungs. Especially if you're getting paid to do just that! Of course, even rush hour traffic in Shreveport (at the time, anyway; I don't know about now) was nothing compared to the kind of traffic we have out here in the Bay area all the time, and driving is something I actively avoid these days.

All of which is beside the point. Beside it, because what's important is that I worked at that flower shop.

Except for the other delivery driver, all of the other people who worked at the flower shop were women, and it was owned by a woman. I suppose that makes sense. In the South, if you were a dude who liked to do anything with flowers, it made you automatically gay. Even working as a delivery driver made you suspect, I shit you not. Meaning, it was said to me in all seriousness more than once by dudes who found out I delivered flowers, "You're not gay, are you?" Which is to say that I don't think a guy could have gotten away with working in a flower shop or arranging flowers in the South back then. And that still might be the case, especially these days, in a lot of places. If you like to work with flowers, it means you're gay and, if you're gay, you're going to get the shit beat out of you.

Yeah, that bit of social commentary was free.
But, then, it's all free, but that was extra free.

What this all means is that I spent a considerable amount of time that summer listening to this small group of women doing a lot of gossiping, especially about their home lives, and talking shit about their husbands. Or praising them, depending on the day. There was one woman in particular who -- the correct word here is not precisely "complained," but I don't have a better word than that at the moment -- complained about her husband a lot: He was in the midst of a midlife crisis and, evidently, doing everything he could to kill himself.

I don't mean that he was trying to commit suicide, at least not directly, but he had taken up living dangerously and doing all kinds of extreme sport shit.

It all started with a red sports car. A small red sports car (I don't remember what kind, but he did offer me a ride once which I awkwardly declined). A convertible. Which he never drove below the speed limit unless you count the brief number of seconds it took him to get to 60 when taking off from a red light (which is why I declined a ride in the car). I think there were numerous speeding tickets involved in all of this.

From the sports car, it moved on to skydiving, hang gliding, and I don't know what all else. He really wanted to try surfing, but it's not really the kind of thing you can do in Louisiana. Still, she wasn't too concerned until he took up dirt bikes. At the point when I started working there, he'd already hurt himself several times, and she was legitimately frightened that he was going to die.

I'd heard a lot about him by the time I finally met him. He came walking through the back door of the flower shop in all of his dirt bike gear and covered in, well, dirt. He was in his 50s, hair gone to grey, wiry frame. I don't know what he did for a living (other than try to kill himself), but his wife worked at the flower shop for the social interaction, not because they needed the money, and that money was just hers to spend as she pleased, so she also used to talk about what she bought with her paychecks. He had a swagger to his step, unless it was all of the dirt bike padding that caused it. Honestly, it was hard to tell.

He'd come by that day because he'd wrecked his dirt bike that morning -- but don't worry, because he was okay -- and it was going to take a couple of weeks for the repairs. Because he didn't want to wait to get the motorcycle back, he'd gone to buy a new one. However, while there, he'd been seduced by a crotch rocket (that's the motorcycle equivalent of a sports car, for those of you who don't know) and decided to take up street racing while waiting to get his dirt bike back. He wanted to show off his new bike; unfortunately, not a single one of us really cared. The other delivery driver might have because he was also a mechanic and into that stuff, but he wasn't there that day.

The husband-guy really needed the prospect of death to prove to himself that he was alive, something that I've never understood and I hope that I never arrive in a place like that. What strikes me now, though, is the inherent violence of this kind of existential crisis. Maybe all existential crises, because they all boil down to the same thing: a conflict between what was and what will be and what to do about it in the now. All conflict contains some amount of violence, even if it's not physical.

When I contemplate the current existential crisis we're going through in the USA, right now, this guy, with his need to risk death in order to feel like he's living, is what comes to mind.
But more on that later...

If you enjoyed reading this post, please share it.
It's not hard, just a couple of clicks.
Thanks!
Posted by Andrew Leon at 12:00 AM