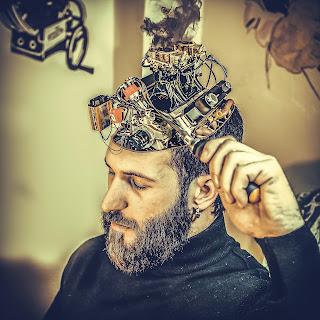 I guess all of this started for me with a thought I've seen repeated all across social media:
This is not the America I grew up in.

Because this is not the America I grew up in. Or, at least, it doesn't feel like it is. Even growing up in the South, where racism was (and is) more than common, we were all taught (at school, anyway) that racism is wrong. I suppose it's not difficult to digest that message as a kid, and I did. I took it to heart. But, maybe, I just got lucky with good teachers...

I have a cousin who used to call the Civil War, the war of northern aggression, and used to argue all the time that it was about state's rights. I'm sure he still believes those things (though I haven't spoken to him in 20 years). Honestly, thinking back, I did get some of that in school, about the state's rights issue, but that was always overshadowed for me by the issue of slavery. It seems that an awful lot of people in the South came away with the White Supremacist message that the North unlawfully stole their slaves, and they have been champing at the bit ever since to get them back.

But it's more than just the racism and the South for me that's causing the disconnect; it's this whole problem with Nazis. While there were conflicting messages going out about the Civil War and racism, there was no conflict on the issue of Nazis. It was pretty standard teaching that Nazis were the ultimate evil and Hitler pretty close to Satan incarnate. People seemed to agree that World War II was an experience we never wanted to repeat. And yet...

And, yet, here we are with Nazis in the White House (and there seem to be an awful lot of them with the name "Stephen;" what's up with that?). And I can't, for the life of me, wrap my head around how we, as a nation, got to this place. Again. It makes me feel crazy, as if I'm the one suffering from the existential crisis.

Which does not mean that it's not my responsibility; clearly, I am part of the mass of people who didn't work hard enough 20 years ago to start putting a stop to this assholery. We all let the GOP get to the place where they are today. Well, not millennials. America is not one of the things that anyone can legitimately say that millennials are ruining.

No, that's pretty much just the Boomers, and the Gen Xers who let them get away with it. But they are our parents, and it's difficult for a child, even an adult child, to step up and tell his parent to quit acting like a sociopathic idiot. But it's no excuse. We should have done more to stop this escalation, even though I'm not sure what that more would have been. Certainly speaking up sooner and louder that this shit wasn't okay.

But we didn't... And, now, we're at a crisis point because of it. So many crises...
But the climate crisis is the one that may kill us all, and the GOP seems pretty intent on letting it do just that. You know, for profit. Unless someone shoots us all first, because the GOP also seems just fine with that.

Unfortunately, all of this really comes down to an issue of violence and whether violence will be necessary to restore sanity to the United States. The Right is heavily armed and Trump (#fakepresident) has already been hinting at the use of force to retain his power. And we know that he loves dictators and authoritarian rulers.

Then there's the need to for someone to just make the GOP stop what they're doing. They've become like the disobedient child who doesn't listen because the parent only ever makes threats and never follows through, so the kid pushes and pushes and pushes... And that's what they've been doing for decades, now, and no one has ever said, "Enough!" And it's time for that.

Yeah, I realize that we get the opportunity to do that through voting, but I'm not sure that's going to be enough and in time this time. Or that the GOP will voluntarily relinquish power as they get voted out. They've shown themselves to have more authoritarian tendencies than are healthy for the USA.

Then there's the issue of the growing lack of confidence in democracy, which is not a topic I'm really going to get into right now, but it's disturbing on so many levels, because for more than 200 years America has been Democracy. It's probably that more than anything else that's feeding the existential divide in the United States. How can we be the United States without democracy? Obviously, in my mind at least, we can't.

All of that, I guess, to say that now is the time to really cling to the ideals that America was founded on. Cling to them and stand by them. The idea that ALL men [people] are created equal and that people should be allowed to pursue their own happiness. You know, as long as that happiness is not controlling someone else's happiness, because that's bullshit.