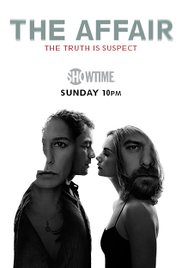 My wife and I don't watch a lot of TV. In fact, we don't actually watch "TV" at all. Everything we watch is after the fact on DVD. This allows us to vet the shows we're going to watch, at least to some extent. The Affair was one of those shows that was getting a lot of buzz, and my wife wanted to check it out, so we spent a few weeks and watched season one.

I never really took a liking to the show (Well, actually, I just didn't like any of the characters. Any of them.), but I can't say it wasn't interesting. If you don't know anything about it, the first season is told by viewing the same incidents from each of the main two characters points of view. So you would watch everything through Noah's eyes and, then, watch the same events through Alison's eyes. The differences were intriguing and, from a psychological standpoint, I found it interesting enough to engage in.

Plus, there was a murder.

It's actually one of the biggest failings of episodic television; at some point some writer will want to do a particular story that requires a character (or characters) to act out-of-character. When it causes the audience to say, "Wait, that character would never do that," you have a problem, because, the truth is, people tend to act in very predictable ways. Which is not to say that there aren't times when people don't act "out of character," but, when they do, it's not sporadic and generally has a pattern all of its own. However, when you are busy bending characters to cause plot points to happen whether those things are appropriate to the characters or not, you end up with an unbelievable show.

So we spent season two feeling out of sorts with the characters and the things they were doing. It's not that I don't understand, especially as a writer, wanting specific things to happen, but, if you can't figure out a way to have those things happen from the character's motivations, you need to find another way around.

Or, you know, be writing a horror story. Because, in a horror story, if you want to make one of your characters start eating spiders, you can totally do that, even if that character had been the most arachnophobic person on the planet. There's always a way to explain erratic behavior in a horror story!

Not that it's not kind of a horror story when your characters start getting all unbelievable on you. Creepy, I would say. And, well, actually, Noah is kind of creepy. But, then, he's a writer, and writers were rated in the top 10 creepiest professions for men. Oh, wait, I'm a writer...

Yeah, okay, I don't recommend The Affair. It's obviously one of those shows that was went with the initial idea before they'd thought it all the way through, and, now, they're just making it up as they go along. Plus, it's full of horrible people.
Did I say horrible? I mean horrible.
Posted by Andrew Leon at 12:00 AM