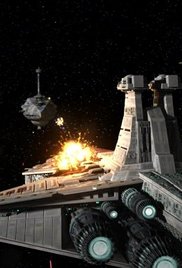 -- Who's the more foolish, the fool or the fool who follows him?


[Remember, you can sign up to join the Clone Wars Project at any time by clicking this link.]

I never watched the Droids cartoon from the mid-80s, but I feel like I am now. Which may be the point with this and the previous episode. Maybe these are meant as an homage to that series. At least it's just the two episodes.

Which is not to say that this was a bad episode. For an episode centered on the droids, it was quite good, actually. It's just that with the weak start of season four, it's at the trailing end of a series of episodes that don't live up to the quality of the previous three seasons. If this episode had been used as a one-shot between more serious arcs, it could have been a welcome addition of humor.

Still, this episode did manage to make me LOL a number of times. When I say LOL, I mean that literally. Not only does this episode feel like an homage to Droids but also to The Wizard of Oz. And, maybe, Willow. The tiny fairy-like aliens on the first planet R2 and 3PO end up on reminded me a lot of the two brownies from that movie.

Speaking of which, their introduction is handled pretty well. It's very A New Hope with the jawa introduction. Oh, with some Gulliver's Travels thrown in. You know, this episode seems to be an homage to a lot of things as I think about it, and, as I think abut it, I'm appreciating what they did here. I really do wish this episode had had better placement within the series as a whole.

Anyway... What I was trying to say is that the moment when 3PO accidentally knocks R2 over onto the leader (the Wicked Witch character) of the little fairy people and squashes him like a bug made me laugh. Even though I've seen  the episode before, I had evidently forgotten that happened, because I was not expecting that happen. Then the fairies start singing the wicked witch is dead song except with slightly altered words. It was a good moment.

And that's just in the first 10 minutes or so of the episode.

Okay, I think this one is worth watching on its merit as a singular episode. I actually kind of want to go back and watch it again right now just to see if I missed any of the allusions. I'm not going to because I have other things to do, but I want to.


"Please note, whoever you are, my counterpart here is programmed in 47 schools of self defense."
Posted by Andrew Leon at 12:00 AM