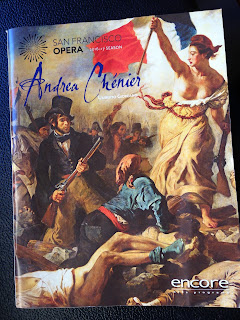 How do you really know that fall is here? Because opera has started! Yes, the new opera season has begun, and my wife and I have begun our opera pilgrimages. We decided to become season subscribers for the 2016-17 season because that makes the opera fairly affordable. Honestly, as long as you don't mind sitting up where the air is thin, the opera actually is fairly affordable. Guess where we sit. Yeah, we take oxygen tanks.

It's not really that bad, being up in the top of the balcony, and, actually, doing the season subscription got us better seats than we could afford if we were buying seats for individual operas.

The first opera up was Andrea Chenier by Umberto Giordano. Chenier is the only opera of Giordano's more than a dozen pieces that is still ever performed, and with good reason, evidently. Not that Chenier wasn't good or watchable -- I'll get to that more in a moment -- but, if this is the best of his works, it's understandable why this is the only one that's still being done. I'm assuming it's being presented now because of the setting: the French Revolution, the ultimate disagreement, let's say, between the 99% and the 1%.

The problem with that as a reason is that the revolution is just a prop for the love story, so the class division is barely touched on. It's unfortunate because what could have been powerful social commentary is undermined by a rather ineffective love story.

Of course, looking at this love story, which was first performed in 1896, does at least slightly inform us as to why insta-love in stories is such a thing. The opera opens with a party at the home of Maddalena di Coigny (the female lead) at which Andrea Chenier is present. Now, Chenier is an actual historical figure, a French poet who got himself into trouble during the revolution and was executed for it. So Chenier is at this party in 1789 just before the revolution gets started, and our leading lady, Maddalena, makes fun of him for being a poet in front of all of her friends, all of whom get a good laugh out of it. Chenier responds by improvising some poetry on the spot, putting Maddalena to shame and causing her to flee the room.

Five years later, Chenier is an important figure in the revolution and Maddalena is in hiding. She decides to seek him out to help her, which she does initially by writing him anonymous quasi-romantic letters. However, when she finally comes face to face with him, she opens with, "Hey, do you remember me? I've always thought of you like a brother, so I was hoping you would help me." In my head, the responses go something like this:
"Sure, I remember you. You made fun of me in the middle of your party and made everyone laugh at me."
"I met you one time! What do you mean you think of me like a brother?"
"Ew! You think of me like a brother, but you've been writing me love notes? You're sick, lady!"
Again, "I met you one time! You're part of the aristocracy that we're fighting against. Why would I want to help you?"
All of those make sense, right? What we get, instead, is this:
"I love you!"
And she responds with, "I love you, too!"
Thus, we have a love story. That part was hard to swallow. And the two leads are about as interesting as their love story.

However, the opera is saved by the character of Gerard, who is also in love with Maddalena, and who is a fully formed and complex character. The actor playing Gerard, George Gagnidze, does a great job with the role on top of the singing. The two leads are fairly flat in their performances, but Gagnidze puts obvious emotion into Gerard and was well worth watching. His pseudo companion, The Incredible, played by Joel Sorensen, is also very good.

The ending is also difficult to accept for reasons I'm not going to go into other than to say that the character who shows that his love is true in the sense of wanting what is best for the other person is not Chenier. To say that the ending was unsatisfying doesn't really say enough about how empty it is, although I think it was supposed to be some "love conquers all" kind of statement.

So, yeah, there was some issues with the story, but opera is not all about the story. The singing was great even if it was almost all of the stand-in-place-and-sing variety. The sets and costumes were magnificent, especially the sets. I mean, the sets were impressive.

It wasn't a great opera, but it wasn't bad, either. Certainly, it was much better than last year's Usher opera. My wife and I have already decided that if this is the worst of the operas this season that we won't be disappointed.


[Make sure to check out yesterday's recipe post!]
Posted by Andrew Leon at 12:00 AM