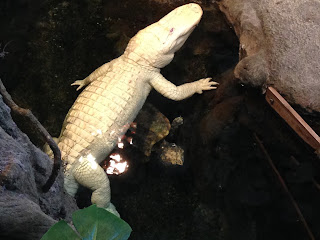 It is commonly thought that Claude is an albino alligator.
It's not true.
Claude started out a normal alligator in the swamps of Louisiana.
He had friends. Mostly other 'gators, you know, but Claude was a bit less inclusive than most of his kind and, one day, befriended a young boy. Young boys with 'gator friends aren't so uncommon in the wilds of the bayou. It's just that it usually doesn't end well.
Neither did this one but not for the reasons you might think. 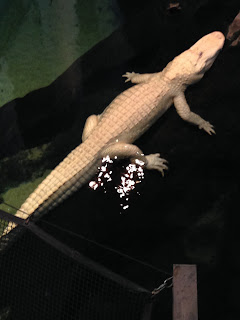 While out playing one day, Claude and his friend human came across an old shack out in the swamp. It seemed abandoned. Being curious, as one might expect of a 'gator willing to have a human friend (and vice verse), they investigated.

Claude, being a 'gator, managed to escape, but what he saw of what happened to the boy drained him of all of his color.

He's happy, now, to live in the museum. It means he's safe.
He tries not to think about the boy.
Posted by Andrew Leon at 12:00 AM