Dream of the Red Chamber (an opera review post) 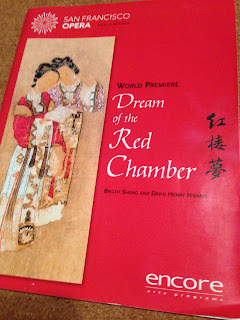 Dream of the Red Chamber is a new opera. As in brand new. In fact, this was the world premiere. Not that we saw the first showing of it during its run. It's more like seeing a movie on opening night but seeing the 3:00am showing because the earlier showings were sold out. It's still opening night.

It is, however, a very long book (evidently, Martin has nothing on this guy), so the opera is based on this very particular plot arc of the book, one which involves a love triangle.

In a general sense, this is not a problem; however, the opera spends the first half (until the intermission) setting up the triangle, and it does a poor job of it. Let me explain:

The lead male, Bao Yu (all of the names are symbolic, but I'm not going to go into all of that), has grown up in the women's house, the red chamber, something not normally allowed. During his time there, he has fallen in love with Dai Yu and she with him. They have a lot in common, though she is a "plain" girl and an orphan, making her a "poor match" for Bao Yu, at least according to Bao Yu's mother.

Especially since, in the opera, it is almost immediate that Bao Yu's mother begins to push Bao Yu and Bao Chai together (as does Bao Chai's mother). Bao Yu is never torn between the two women. He wants to marry Dai Yu. But it's Bao Chai who is the "good match" and, thus, the conflict. This conflict, which is heightened by a visit from Bao Yu's sister, is not introduced until the very end of act one, leaving most of act one to be various songs about people's intentions with singers standing in place telling of their love or whatever.

Basically, there was little action, leaving act one to be fairly dull.

Act two was a complete turn around, though, as all the court intrigue around the marriage kicked in. The family is trying to force Bao Yu to marry Bao Chai, but he is taking a stand against that. Unfortunately for him, the Emperor himself wants the marriage to happen... because he has a plot underway against the two families. Needless to say, act two is quite a bit more exciting. Enough so that it makes the opera worth watching.

Actually, it's all pretty interesting. Enough so that I'm exploring the idea of reading the book. It's twice as long as War and Peace, which I haven't read yet, so that's saying a lot. I've said for a while that the quality of an adaptation can be told by whether it makes the "viewer" want to explore the source material. Based on that, I would have to say that this is a successful opera. It's certainly not bad, just a bit slow and boring through the first half.
Posted by Andrew Leon at 12:00 AM