A Family Used To Live Here (pictures I like) 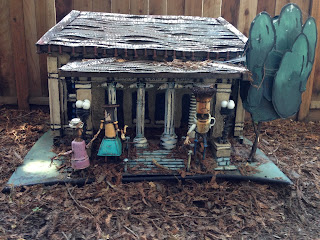 It was foggy that last morning.
Not that that was unusual. There was often fog in the morning.
It was quite a bit thicker than most mornings on that last morning, though.
There was a strange light in the fog. Red and blinking.
Pa thought it was kinda purty.
It made him think of Rudolph, but it wasn't Christmas. Not even close.
He called to Ma in the house, "Hey, Ma, come look at this."
Little Sally, of course, came bounding after Ma as she stepped out onto the porch, "What is it, Pa? What is it?"
The women folk saw the light the same as Pa did,
Ma wanted to take Pa's hand, but Little Sally was too busy pulling and tugging on her for Ma to get over to Pa.
"Let's go see it, Ma! Com'on, Pa, let's go find out what it is!"
Before Ma or Pa could say "Stay put!" there was a bright flash of light, bright as day, and the three never moved again.
The blinking red light pulsed a few more times, then it, too, was gone.

Later, after the fog broke, a little boy was pulling his mother along through the field as they went out to market. He almost tripped on the little tin house and the little tin people. "What is it, Momma? What is it?"
The mother and the boy crouched down to look.
"I don't know," she said. "Some kind of doll house, I suppose."
The little began trying to pick up the tin house that was half as big as he was, "Can I keep it, Momma? Can I? Can I keep it?"
Posted by Andrew Leon at 12:00 AM