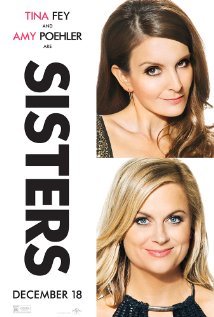 There's something to be said for any movie willing to go up against Star Wars and, whatever that is, it can be said about Sisters. No, I'm not sure what it is, but I know there's something. Actually, they may have said it best with their promo explaining why they kept December 18 (henceforth known as "Star Wars Day") as their release date:


Honestly, the promo is my favorite thing about the movie, which is not to diminish the movie at all, but I think the promo is pretty darn awesome.
Not that it has anything to do with the movie itself.

So, yeah, I'm sure if there was an actual movie category called "stupid comedy" that this would be in it, but, then, so would a lot of very popular and great comedies going all the way back to the 80s. That doesn't make them not funny. And, yes, there are some things that cross the line of believability in Sisters, but that doesn't make it not funny.

And it is funny. Very much funny.
But with Tina Fey and Amy Poehler how could it not be?

There's even a little bit of message about what it is to be family.
But, mostly, it's just funny.
And a little bit painful. The music box knows what I mean.

There's not much else to say about this one.
James Brolin and Dianne Wiest were great as the parents. My kids are still teenagers, but I could totally empathize with them.
John Cena was hilarious.
Ike Barinholtz was good but a little bit distracting because he looks too much like Mark Wahlberg, and my brain kept wanting it to be Wahlberg but it wasn't, which was disconcerting.

Look, I get it. Usually these kinds of movies are full of teenagers doing dumb teenager kinds of things, but that's the point. The point that we don't ever really grow out of wanting to do those things. I guess. I mean, I never did those things, but I had friends who did, so I get it. Basically, you have to find the balance between growing up and staying a kid.

And it's funny!
Just remember to turn off the water.
Posted by Andrew Leon at 12:00 AM