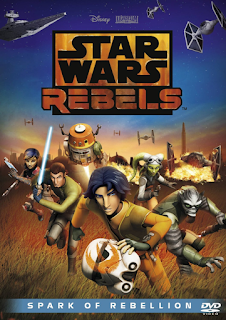 "You're about as bright as a binary droid."

The real question in this two-part opening to Rebels is, "Is Ezra a good guy?" Ezra doesn't seem to think so. He looks out for himself. Period. At least, that's his perception of himself. It's all rather Han Solo. Of course, as with Han, Ezra finds out he can't so easily turn his back on those in need.

Which gets him into trouble.
And allows him the opportunity to find out whether he can depend upon the crew of the Ghost.

Oh, and, also, Kanan, the captain of Ghost, or at least the leader of the little rebel group that operates on the Ghost, is a Jedi.

Order 66 didn't quite get all of the Jedi, just almost all. There's that whole thing about Darth Vader hunting down and killing the remnants of the Order. Kanan was one of the survivors. So the question is simple:
Did he get lucky or is he that good?
That, I suppose, is something we'll have to wait and find out.

And, yeah, I want to find out.
I'm still not happy about losing Clone Wars, but I'll take Rebels as a reasonable substitute.
I'll note again, though, that Rebels is a show that is unambiguously targeting a younger demographic. You can even see it in the animation style. I don't know. Maybe that it clearly targets kids as its viewing audience allows adults to feel more at ease watching it. It's clearly defined, and adults seem to need stricter definitions than kids. So it's okay to watch a "kid show" if you know that's what you're doing, but it makes you ill-at-ease to watch a show that skews to both markets. Or something.
Posted by Andrew Leon at 12:00 AM