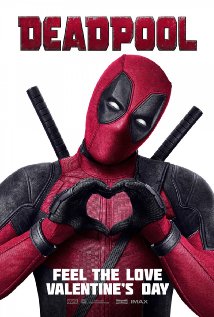 I remember when Deadpool made his first appearance way back in New Mutants #98. I have the issue. Multiple times. However, I was unimpressed. He wasn't the big deal in that issue, anyway, not at the time. That was a character named Domino. Yeah, I know; you've never heard of her. I bet Deadpool has completely forgotten her and wouldn't even recognize her if they passed on the street. She'd be all, "Wade! Wade! It's me, Domino!" And he'd stare blankly through his mask and say something like, "Get off me, Spade-face." Back then, though, he was barely a Spider-Man ripoff and was contained completely within all four walls.

I was mostly out of comics by the time Wade had busted down that wall, so I never really got into the character. I knew enough, though, to be really pissed about the Wolverine movie and what they did to Deadpool in it, whether I liked him or not. Also, they had so perfectly cast Ryan Reynolds in the role and, then, basically, told him to bend over. Kind of like how Wade took that one bullet in this movie.

But, as Deadpool does, he, and Reynolds, came out on top in the end. Actually, I'm not sure if Ryan Reynolds isn't actually Deadpool. Or, what is even more likely (because, really, did Reynolds really exist before 1991?), when Deadpool broke that fourth wall in the comics, he emerged as Ryan Reynolds and has been trying to get to do the movie version of himself ever since. All of which is to say (again) that Reynolds is the perfect choice for Deadpool.

The movie is brilliant as soon as the film begins to roll, having the most creative and hilarious opening credits I've ever seen in a movie (something I'm sure you'll see repeated in many of the reviews). And it's not just the credits, it's also the visual that goes along with them. Though it's mostly the credits. I want to see the movie again just so I can see the credits again. Well, and then the rest of the movie, too, but the opening credits are enough to warrant a repeat viewing.

The rest of the cast is nearly as inspired as Reynolds. Okay, well, that's not true, because such perfect casting is extremely rare (and mostly reserved for Marvel comic book characters at this point), and no one else is as vital or as perfect as Reynolds is in this movie. However, Morena Baccarin had great chemistry with Reynolds, and it's hard to imagine inserting someone else into the role of Vanessa. Likewise with T. J. Miller and Gina Carano (even if she doesn't talk much). Oh, and Stefan Kapicic (even though all he does is talk since he's the credited CGI guy).

Okay, sure, the movie is super violent (sometimes in a Looney Tunes kind of way), super vulgar, and full of enough f-bombs to use in the warhead of a nuke, so I understand that some people could be super offended by the movie. But it's also full of humor (not just crude) and a lot of heart, and it's the heart that carries the movie, not the R-rated material. And, yeah, sure, the movie does poke some fun at the super hero movie industrial complex (like the studio not being willing to pay for more than two X-Men to appear in the movie), but it's fairly clever and a lot of fun to watch. As long as you're not being offended. Or squeezing your eyes shut at the violence.

But should you see the movie? Well, that's hard to say. I want to just say, "Yes! What are you kidding me? See the movie!" But, then, there are those people who will be offended, and those people should just stay away. There are also people who don't like super hero movies, but I think some of those people would enjoy this movie for no other reason than how irreverent it is, so that can't really be a gauge. Basically, you should do your research. Watch the trailers. All the trailers. If you find yourself giggling, you should probably give the movie a try.