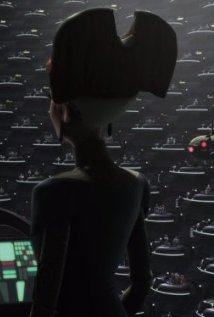 
This episode, I believe, is the first episode where we begin to see what and who become the core of the rebellion. I could be wrong about it being the first because I'm not looking back to see, but it is the first episode with Mon Mothma, so I'm going with it. The episode revolves around the issue of putting a halt to the creation of anymore clone troopers for the war.

Which is an interesting question when you're in the midst of a war against an aggressor. The contention of Padme, Bail Organa, and Mon Mothma is that if troop production is halted then diplomacy would have to take its place. They believe diplomacy is the road to peace. Palpatine, of course, believes that peace can only be achieved through victory on the field.

At least, that's his stated belief.

I suppose that must be somewhat like playing chess against yourself only with some of the pieces making their own decisions. Hmm... Maybe it's more like playing The Sims. My wife used to get constantly frustrated by her sims going off and doing things she didn't tell them to do.

The action in the episode has nothing to do with any of this, though. All of this is just the backdrop, but I find the backdrop more interesting than what's going on center stage. Not that there's anything wrong with what's going on center stage, because there's not. It's a fine episode and one that doesn't involve the Jedi at all. Or the clones. It's very rare in that. Still, it's the philosophical questions that are touched on that are of real interest, the things you see played out in the background.
Posted by Andrew Leon at 12:00 AM