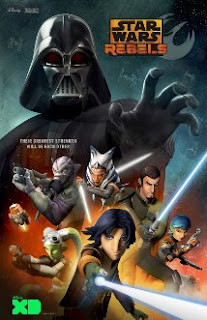 I've been a fan of The Clone Wars since it came out. We own the series on DVD. I was less than pleased when Disney announced, shortly after acquiring Lucasfilm, that they were cancelling production on it. Season six was in mid-production and season seven was in  the early stages of production and, while it wasn't a raging, everybody-must-watch-it-show success, it seemed to be doing fine. But, then, it was just over.

And, you know, I get it. From a business perspective, what they did made good sense. That doesn't mean I have to like it, though.

See, the thing is, The Clone Wars had a problem. It couldn't figure out its demographic. It wasn't a cartoon -- excuse me, animated television show -- made for kids. That is, they, the kids, were not the specific target audience. Clone Wars was launched for the Cartoon Network's prime time, adult viewing time slot. Clearly, it was an animated show that wanted an adult audience. It featured adult characters and dealt with a lot of mature themes. Sure, all of that was then presented in half hour blocks in such a way that kids could also digest the material and Ahsoka was included to allow the younger viewing audience a character they could identify with. But it wasn't a show for kids and, so, it also wasn't a show for adults. It just grabbed people like me who wanted to know more about the gap between Attack of the Clones and Revenge of the Sith and all the kids who just like the excellent Star Wars action.

Rebels, however, is a show solidly targeting kids.You can tell because the protagonist is a kid. And, well, from what I can tell so far (only having watched the first couple of episodes), the overall action is going to revolve around the Empire's search for the "children of the Force" in its quest to exterminate the Jedi. So, still, maybe, dealing with some mature themes but, I'm going to assume, handled in a child-appropriate way. After all, we are quite used to things like dinosaurs and killer robots and gangsters chasing kids with the intent to kill.

And, well, Disney wanted to bring Star Wars to the Disney Channel, not Cartoon Network, so allowing Clone Wars to slip away allowed Disney to launch Rebels on its own network.

I'm glad to see that some of the characters from Clone Wars will carry over.

So, yeah, I'll be reviewing Rebels as I watch it, but it won't be on a weekly basis like we're doing with The Clone Wars. It will be interesting to see how it compares.
Posted by Andrew Leon at 12:00 AM