"The Fall of the House of Usher" (a book review post) 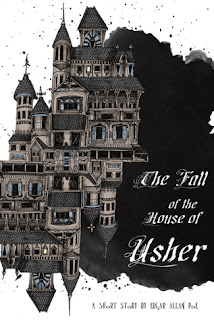 "The Fall of the House of Usher" is a perfect example of how our modern idea that showing is better than telling is just that: a modern idea. Usher is, basically, a story that is all telling. Which is not to say that you ought to like it just because it's Poe -- in fact, most of you probably wouldn't like it -- but it is to say that this story, despite having virtually no action or dialogue has become one of the most famous of Poe's stories.

Honestly, it's not one of Poe's most compelling stories for me, but that has less to do with the telling aspect of the story than it does with the fact that there is no good reason for the narrator to stay for as long as he does with Roderick Usher other than to satisfy the needs of the plot. Where's the motivation, Poe? Not that Poe doesn't supply one, I just can't really buy into the whole "he was my childhood chum" thing. Maybe it's just me, but, if my best friend from childhood wrote me a letter and begged me to come see him because, well, basically, he was all morose and stuff, I'd have a hard time finding it in me to make that trip after not having seen the person for at least 20 years. And, even if I did decide to go, I wouldn't stay there for months on end listening to my previous buddy being melancholy and going on and on about how horrible everything is.

Really, for the end result of the story, Usher goes on a bit too long. Poe gives us way more information than we actually need in order to appreciate the horror at the end of the story. We just don't need to know that light hurts Roderick's eyes or that he can only listen to certain kinds of music or any of the other sense-related conditions he has, as none of that actually relates to what's going to happen. It does help to fill the story with a sense of despair but not in a way that makes sense to the story.

It's a story that leaves the reader with a lot of questions. Maybe Poe meant it to be that way, but I don't really think so. I think it was meant to have a horrifying ending and for that to be enough. You'd read it, get scared, and go on and not think about it anymore. Personally, I like answers.

None of which is to say that I disenjoyed the story. I didn't. It's good for what it is. If you like Poe, you should definitely read it. If you haven't read any Poe, you should start somewhere else.
Posted by Andrew Leon at 12:00 AM

Email ThisBlogThis!Share to TwitterShare to FacebookShare to Pinterest
Labels: Edgar Allan Poe, Roderick Usher, The Fall of the House of Usher