The Fall of the House of Usher (an opera review post) 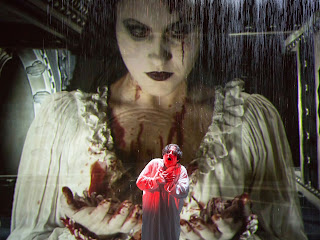 When you think of operas (assuming you ever think of operas) and you think of all the reasons you don't want to go to an opera (because I know most of you don't want to go to an opera), this is the opera you're thinking of. No, seriously, it is. This opera, both of them, actually, because this was a double bill (two different interpretations of Poe's "The Fall of the House of Usher"), is the very epitome of everything that can be wrong in opera.

The one cool thing, even, turned out to be a bad thing by the end of the show. So... At that San Francisco Opera house, they have these big mobile projection screens that can be on the stage. This allows them to project images which allows for greater scenery options. You want your scene to be on a beach, no problem. In the forest, no problem. Whatever, no problem. Thus far in our opera viewing, the screens have been used very minimally. These performances were set up around using the screens to convey movement. For instance, in the first show, the screens are used to convey movement through the house of Usher.

Right at first, it was way cool. Very neat. But... Well, then the actors just stood in place and did their singing thing. Every once in a while, they would switch places on the stage. The background stuff just became these constantly moving pictures that didn't mean anything. It was inane. What could have been something cool became an excuse for a poor performance. It was like going to a movie that's all special effects with poor acting and no story.

I mentioned that the actors just stood and sang, right? Well, that wasn't the worst of it. It gets worse? Why, yes. Yes, it does. The singing, which was in English for the first one, was just sung dialogue, which is a thing sometimes done in opera but still... Sung dialogue to not very good music. There were no actual "songs." It was monotonous and hard to follow. And the music overpowered the performers throughout both pieces so that you couldn't actually hear them anyway.

You know, I don't want to imply anything (okay, so maybe I do), but Usher House (the name of the first of the two operas) was written by a Gordon Getty, a big donater to the San Francisco Opera. "Big" is probably not the right word there. The dude is beyond loaded and considered one of the richest men in the world. Is it possible that someone in charge actually thought his opera was good? I suppose so. However, I'm going to go with the Occam's razor explanation on this one.

[Edit: Because I was rushed for time when I wrote this, I forgot to mention the vampire theme in the Getty opera. The doctor, who appears for about one sentence in the short story, has a vastly expanded role in his opera. He's a pale thing, and it's implied that he's been alive for hundreds of years. The disease that Usher (and his sister) is suffering from has all the symptoms of someone who is being fed on long term by a vampire as in Stoker's Dracula. It also serves as the basis for Roderick's sister to escape her tomb. Having this incorporated into Usher is just stupid. Utterly.]
Posted by Andrew Leon at 12:00 AM