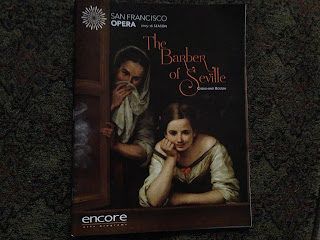 The Barber of Seville is a title you've probably, at least, heard of. It's one of the most famous and popular of all operas, and, after seeing it, I can understand why. If nothing else, you probably recognize this piece of music:


The opera is by Gioachino Rossini, based on a play by Pierre Beaumarchais. You might remember that I mentioned that name back in my post about The Magic Flute. The Barber of Seville is the first play in the trilogy that continues with The Marriage of Figaro, which Mozart composed as an opera 30 years earlier. No, Mozart didn't just decide to start in the middle. In actuality, Barber had several operatic interpretations before Mozart did Marriage, so Rossini wasn't doing something that hadn't already been done. He just did it better than all of the earlier versions, and his opera has become the operatic interpretation of The Barber of Seville just like Mozart's version of The Marriage of Figaro is the version of that play.

All of that to say that the recent production of The Barber of Seville by the San Francisco Opera was amazing. Brilliant, even. Look, let me put it like this: This opera was not sung in English and, yet, I found myself getting so lost in the action and music of the play that I would forget to keep up with the translations. I would have these, "Oh, wait!" moments where I would have to look back to the screen with the English on it. This is what opera was and is meant to be.

All of the performers were extraordinary. There was no just standing around and singing in this one. Lucas Meachem, as Figaro, was commanding. He brought all of the necessary flair to the performance of a character who is larger-than-life. Rene Barbera and Daniela Mack were great as the lovesick couple. Allessandro Corbelli was spectacular as Rosina's father. And Efrain Solis (who played Papageno in The Magic Flute) was amazing in his non-speaking (singing) role.

There was great comedy, great singing, and great acting. It was so good, in fact, that, if it hadn't already been 10:30 pm, I would have walked right back in to see it again. Unfortunately, it was already at the end of its run when we went to see it or I would have tried to go again. Seriously, this was a great performance. If you're going to try out opera, this is the kind of production you want to start with.

This is us just before going to see Barber: 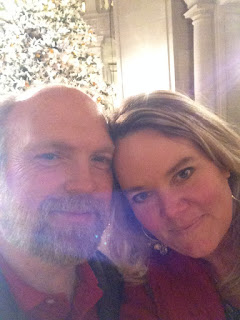