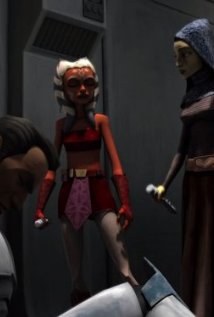 -- Attachment is not compassion.

As you can see by the quote from this episode, this is another episode that deals with attachment, but this time it's not Anakin's attachment that we're looking at.

As the show has progressed, various characters have pointed out how like Anakin Ahsoka is becoming. Possibly, the area of attachment is one of those areas. Ahsoka is presented with a choice in "Brain Invaders" which is similar to the choice Anakin faced back in "Cargo of Doom" and, like Anakin, Ahsoka fails to make the "right" choice.

Unlike Anakin, Ahsoka seeks help and advice after the fact about what happened. Of course, she seeks it from Anakin, but Anakin is, perhaps surprisingly, quite mature about it. He tells her that attachments are things that all Jedi struggle with and that's it can be difficult to know what to do. Things worked out in her favor in this particular circumstance, but it's not going to always be that way. Did she make the correct choice? Anakin can't really tell her that. No one can.

"Brain Invaders" is also a continuation, of a sorts, of the zombie story line, but it's a little more Stargate, actually, than zombie. In that, the story arc for this episode is nothing that hasn't been done before, but it's the crisis that Ahsoka goes through that's the point, anyway. The story is just a way to get her there.
Posted by Andrew Leon at 12:00 AM