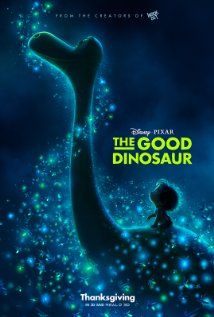 Dinosaurs were my first great love, from the moment I saw my very first one sometime around the age of four. Maybe three. I was instantly fascinated with them, and it was my goal for about 10 years to be a paleontologist when I grew up. But that's a story for another time.

Dinosaur movies, though, are not that fascinating. Inevitably, like in The Land Before Time, dinosaur movies deal with the dinosaur apocalypse and one small group trying to get to safety. So it was that The Good Dinosaur promised to be something different. A movie where the dinosaurs don't suffer an apocalypse. A movie where they live. A movie about what might have happened if they had not become extinct.

Unfortunately, that moment from the trailer, that moment when the asteroid misses Earth and the dinosaurs don't die, that moment happens with the opening credits and is over in a few minutes. The movie goes downhill from there. Downhill into being nothing original or new at all. It's just a weird hybrid of Ice Age (deliver the human baby to other humans), The Lion King, and a bunch of other stuff you've already seen.

That said, the animation, the background animation, is amazing. It's so amazing that at times I questioned whether it was CGI or not. The dinosaurs, though, are cartoony, and don't really fit their environment. They stick out like the proverbial sore thumb.

The other good thing is Sam Elliot as Butch, the cowboy T-Rex. The whole thing with the T-Rexes as cowboys and the Raptors as rustlers was fairly amusing, and Elliot is the cowboy. I mean, you can't really get more cowboy than Elliot. It just oozes out of his voice.

But that's about it for the good.

The problem is that Pixar should have just let this movie die. When you have to, essentially, fire the guy who came up with the idea because he can't put the story together, you should start to re-think whether you should be making that movie. When, after doing the voice recording for the entire movie, you decide to re-write the script and re-record everything, you need to be re-thinking whether this is a movie you should be doing. Then, when you decide to dump virtually all of the voice actors and replace them, you really need to be thinking about whether this is a movie you should be doing. The Good Dinosaur was not a movie Pixar should have been doing.

I suppose I'm glad I saw the movie. Well, I am. It is a Pixar movie, and I wouldn't have been able to deal with just not seeing it, but, then, I wish I hadn't seen it. I certainly won't be buying it. It's the first legitimate failure from Pixar. There's no "Pixar" quality to it at all. It's mediocre at best, just as a movie, but, from Pixar, it's a disappointment. Completely.
Posted by Andrew Leon at 12:00 AM