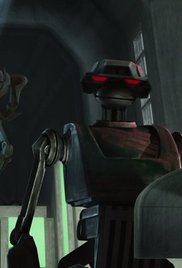 -- For everything you gain, you lose something else.

It's always "nice" to see the return of Grievous. No, seriously. He's like so many classic villains who always got away because they always had some great escape plan ready to go when things didn't go their way. I'm thinking specifically of Zoltar of Battle of the Planets.

So, yeah, Grievous is back, and he manages to capture Eeth Koth. As I've said before, it's nice when we get so see more of other Jedi, and this episode also features Adi Gallia. When a Jedi, a Master no less, is captured, what else do you do other than stage a rescue?

The episode illustrates just how valuable the Jedi are. Well, to the Jedi, at any rate, as they send a whole fleet after Koth and lose a ship in the process. Sure, they also wanted to capture (or kill) Grievous, but the mission, with the rescue of Koth, was a success, even with the loss of the ship and all of the men (clones) aboard.

It kind of makes you wonder.

It also makes you wonder what Grievous was doing in this episode. Grievous' MO is not to capture Jedi but to kill them, so why did he take Koth captive? There doesn't appear to ever be a clear answer to that. I mean, according to him, he did it so that the Jedi would come to rescue Koth, but why? That's also not Grievous' style. He attacks by surprise and always when he has a clear advantage; he would not set himself up as the target of a concerted attack.

Really, I think the writers wanted to do another rescue mission and just forgot to give Grievous a clear motivation for his actions or any kind of plan. So, while the action was rather spectacular, the episode left me wondering why.

There was, however, a great scene where Obi-Wan and Grievous go back and forth about how they anticipated each other's moves. It brought to mind the scene in Princess Bride where Vizzini and Westley have to work out which glass has the poison in it. I'm just not sure in this episode of Clone Wars which one Obi-Wan is.
Posted by Andrew Leon at 12:00 AM