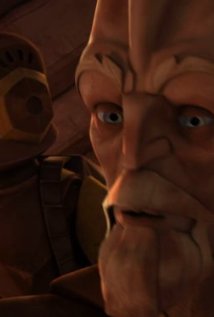 -- Believe in yourself or no one else will.

This episode is pretty much just a straight up battle episode. You need those big, epic battles every so often in Star Wars. It's part of what makes Star Wars, Star Wars. As such, the battle is pretty epic. It's a ground assault against the Geonosians and, actually, pretty violent, which I guess is okay because the Geonosians are bugs. The Jedi cut them apart as often as they do droids, but you don't get that kind of treatment when the Jedi are fighting humans or human-like aliens.

To make it even more exciting, you get to watch Palpatine, using reverse psychology, set the Jedi up for a trap. It also leaves him in the clear because, of course, he counselled against their plan of attack.

Fun things in this episode:

"This is another fine mess you've gotten us into." I'm not sure if that's the exact quote, but it's pretty funny to hear Ahsoka giving Anakin the Laurel and Hardy line. R2 and 3PO are absent from the episode, so Ahsoka and Anakin fill in nicely.

Ahsoka and Anakin keep a running count of enemies they've killed and try to outdo each other. I feel quite certain this was modeled on Gimli and Legolas from The Lord of the Rings.

Ki Adi Mundi, while injured, beats both Ahsoka and Anakin.

The only downside to this episode is that they bring Mundi but don't give him much screen time. While he does get more kills than Anakin, you don't see him doing any of it.

If you like a good battle sequence, though, this is a good episode to watch.
Posted by Andrew Leon at 12:00 AM