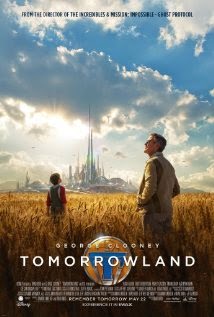 It's always disappointing to me to see a movie getting panned before it's even been released. I don't mean people saying things like, "Based on the trailer, it doesn't look very good," or, "That doesn't look like something I would like to see." No, I'm talking about full on bashing before a thing has even been released. Some examples come to mind, all movies which under-performed due to extreme negative backlash prior to release: Waterworld, Daredevil, John Carter. Of course, then there's always a movie like (the most recent) The Lone Ranger to give proof to some of that pre-release backlash. [Maybe I shouldn't say that, though, since I still haven't managed to force myself to sit down and watch The Lone Ranger.]

It's rather unfortunate that it looks like Tomorrowland is going to suffer the same kind of fate, because it's quite a fun movie. The worst thing that can be said about it is that it's a movie with a message, but it's not overbearing with its message, not like Happy Feet which picks up some dead fish at the end and slaps you around a bit until you feel like you've been abused. No, Tomorrowland is a choice, a choice you get to make. And it's a fun ride to get there.

Britt Robertson is great as Casey. She's spunky, headstrong, and equal parts amazed and freaked out by what's going on around her. I'm unfamiliar with her as an actress, though, so I don't know if this was just a role that fit her or if she did a good job in the part. Either way, she was good, and I'll be checking out more from her to see which is which.

And Hugh Laurie was really good as Nix. I know (now) that he's the famed Dr. House, but I never watched that, so this was really my first experience with him, and I liked him. I'm not saying I'm going to watch House, but I am now interested.

Thomas Robinson was perfectly cast as young Frank. He's just all kid and optimism, and he was fun to watch.

There are a few logic holes in the movie (like Casey watching her future self do something in order to figure out how to do it (a thing I always hate)), but they are few and, really, not very big. Basically, you can explain them away (though you shouldn't have to explain them away, if you know what I mean).

All said, it's a solid movie and a lot of fun to watch. Actually, I think the biggest issue with the movie is not the movie at all; it's the trailer. The trailer doesn't really give you a good idea of what the movie is about, and what it's about is much better than what the trailer leads you to believe. It's certainly not a movie to pass up for no other reason than the bad hype it's getting., and it's a good theater movie.
Posted by Andrew Leon at 12:00 AM