The Clone Wars is coming... 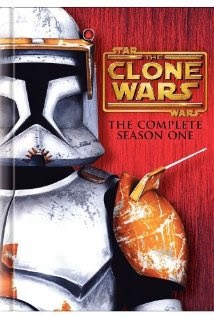 In conjunction with The Armchair Squid, we'll be going through each episode on a weekly basis and evaluating and reviewing them. That means that for... well, like, a couple of years, I guess, there will be a weekly Clone Wars post. If you haven't watched this show and you like Star Wars at all, you really should watch it, and this is a great excuse to do it. This is easily one of the best animated shows ever on TV and, actually, one of the best sci-fi shows, animated or not. Trust me; I've been known to watch some bad sci-fi, and this is not that. If you've already seen it, well, you know you should get in on this. If you want to sign up, just follow the link over to Squid's blog and get signed up!

Now, a few words... which is difficult, because I want to say a lot of words about a lot of different things, but, then, that's a lot of different things, and I don't want this post to go on all season. So let's talk canon. Hey! Pay attention! I said "canon," not "cannon." We are not shooting explosives at people. Here, we use more elegant words from a... okay, well, not so civilized age. Anyway...

Last year, when Disney took over Star Wars, one of the first things they did was to "do away" with the Star Wars Expanded Universe. I have found this whole thing amusing, but the statement they were making had to be made. But let's back up a moment.

Prior to 1991, the only Star Wars canon was the original trilogy. Sure, there were a handful of books in existence (Splinter of the Mind's Eye, some Han Solo books, a Lando book or three), but no one took those as real, especially since some things like Luke cutting Vader's arm off certainly didn't happen within the movie time line. Those books were just fun things on the side. But all of that changed in 1991 due to a couple of events:
1. The publication of Heir to the Empire by Timothy Zahn.
2. Dark Horse comics' release of Dark Empire #1.

Both of these series take place after Return of the Jedi and are responsible for bringing Star Wars back into the American consciousness. One way or the other, you can probably thank Timothy Zahn for the fact that the prequels exist. It was his Thrawn trilogy (and everything that happened after because of it) that showed Lucas that there was still an interest in Star Wars.

Interesting fact:
Zahn originally wanted to write a trilogy set during the Clone Wars. Lucas said "no" because he knew that if he did ever make the prequels (because at that point he had no plans to do that), they would invalidate the books Zahn wanted to write. So Zahn reformed his clone story and set it after Jedi.

Now, here's the thing:
Lucas always said that anything done outside of the movies could be invalidated at any time (see Splinter of the Mind's Eye) and was never considered canon, hence the Expanded Universe. That's what it was: non-canonical material. But, over time, as there became more and more of it and people became more and more invested in it, even people at Lucasfilm, people began to view the EU as being pretty much as valid as anything Lucas himself did. People had come to view the EU as canonical even though they had been told again and again that it wasn't.

When Disney came in with their plans to officially expand the Star Wars universe, to provide a vast tapestry of new canon, they had to make a hard statement so that people would understand that they weren't going to accommodate the EU into their plans. So "the EU doesn't exist anymore" was a clear way of stating that.

The Clone Wars, though, having come from Lucas, is official Star Wars canon. This is the story. I think it's a good one. I hope you come along for the ride.
Posted by Andrew Leon at 12:00 AM