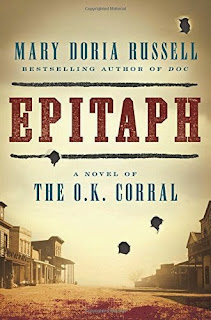 When I was a kid, before I discovered dinosaurs (which I did at the age of four), the very first thing I wanted to be was a cowboy. My grandfather had cows on his farm, so I figured that made him a cowboy, and that's what I wanted to be. Imagine my surprise when I got to my American history class in high school and learned that the term "cowboy" became popularized and associated with the west because of a band of rustlers operating in Arizona in the 1880s know as the Cow Boys. Yeah, you heard me; the Cow Boys were the bad guys.

Interestingly enough, it was these same Cow Boys who would create the enduring legacy of Wyatt Earp and, by extension, Doc Holliday. Wyatt Earp, who was possibly the ultimate frontier lawman... right up until he wasn't.

Of course, there are those who would argue that he was never a lawman, just an outlaw posing as one, but, mostly, those are the outlaws who accused him of that. Or men like Johnny Behan, and we know Behan was crooked, so it makes his accusations a little less believable.

The temptation, here, is to get into the history of it, but that's in the book. To say that Mary Doria Russell is a meticulous researcher is probably an understatement. We'll say instead that I trust her research. And, sure, I'm biased and, sure, this is historical fiction, but I believe the facts are mostly in place and the suppositions logically follow from the facts.

That said, it's Russell's ability to allow the reader to walk along with her characters that is her greatest asset. And that's where her research really shows, I think. She writes as if she knows these people, as if she spent time with them, as witnessed these things herself. It creates a completely believable world.

Basically, I can't recommend this book or Russell more highly. And, although this is a companion piece to Doc, Doc is not required reading; Epitaph is not a sequel.

Whether you think Wyatt Earp walked with the angels or the demons (and it's not unreasonable to suspect either considering that he was never shot; even when his clothes ended up full of bullet holes, he never received a wound), this book is worth reading for the insight on the situation. The incident "at" the O.K. Corral formed a view of the Old West that has never been shaken, one of showdowns and street fights that never really existed. And maybe that's okay, because it's the legends we look up to and aspire to be. Parts of me still want to be a cowboy.
Posted by Andrew Leon at 12:00 AM