The Name of the Wind (a book review post) 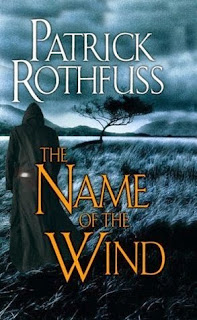 I'm going to start out by saying, "I get it." I get why people rave over this book. It's epic fantasy, and it feels so big. Oh, the incredible world building! And it's told in first person! How can you get better than that? First person epic fantasy!

But it's all a trick. Smoke and mirrors. A lie. Whatever you want to call it. The world building, in actuality, is almost non-existent. What we have are constant views of the insides of wagons and inns. Beyond that, the only thing we have any experience of is the university, and we don't get much of that. Rothfuss fakes it all by telling us this other stuff exists, but we never see it.

Look at Tolkien: He never just tells us a place exists. We come across it, experience it, discover it then, maybe, he tells us about it. Even Robert Jordan and Terry Goodkin take us to and show us the places in his world. Rothfuss just mentions places and lets us assume that his world is big, but he never really even shows us the University. Thinking about it, now, I am realizing how little he gave us about this incredibly "important" part of the book. We know there's a big, box of a building with a bunch of sprawling stuff that was poorly planned. It's like Hogwarts with all the confusion except that Hogwarts has a reason for that to be. Rothfuss just wants to evoke the same kind of thing without having a reason for it.

But I think I'm getting ahead of myself, because I was tired of the book way before Kvothe ever got the University.

The book opens as a third person tale. I was good with that. Really good with that. In fact, I am very not good with the seeming overwhelming desire of everyone to write everything in first person these days. So we take this fine, third person story and, just as it's starting, we switch to first person reflection on the protagonists life. And it is so contrived! I could just feel the author thinking, "How can I get Kvothe to tell his own story?" So, you know, he has a guy show up who wants to make a book out of his story and convinces him -- Kvothe, who is supposed to be in hiding and doesn't want anyone to know who he is -- with almost not effort to do that. The whole situation felt completely out of character for Kote, the persona that Kvothe is playing, and it actually felt out of character for Kvothe, especially as we learn more about him, because he never displays any interest in having people know "the truth" and is perfectly fine with them making up whatever they want to further his reputation.

Then, it got worse. One of the first things Kvothe does is explain to us how to say his name. This is one of the most ridiculous things I've ever seen done in a book and was completely the author, for lack of a better way of putting it, showing off. Think about it. The guy he's talking to knows how to say his name. Even if he hadn't known who Kvothe was, all Kvothe needed to do was to say, "I'm Kvothe." See, there, he heard it. Only us out here in reading land didn't hear it, and Rothfuss, for whatever reason, wanted to make sure we knew the "correct" pronunciation, so he has Kvothe explain it to us.

Now, you might be saying, "But he was explaining for future readers of the story!" Except, well, Kvothe is already a legendary figure -- yes, even in his own time -- so everyone already knows how to say his name, because there are stories about him floating around everywhere. Suggesting that people in the future wouldn't know how to pronounce his name would be like suggesting that we should need Julius Caesar to explain to us how to say his name. Or, maybe, Kanye explaining... um, wait... But, still, the argument stands. I almost just put the book down, right then, when he started explaining his name.

And, then, he stopped to explain how magic works. Really? Why do that? There's no need for anyone to know except that the author wanted to show off how clever he is by explaining his magic system and how it works to the audience. In a world where magic is feared, no one would have stopped to explain that. It was gratuitous. And completely not clever since all it amounted to is that his magic system relies on the laws of conservation of matter and energy.

Except that didn't seem to apply to food, because the food, even in the dead of winter in the snow, seemed to always magically stay warm.

The worst bit, though, other than the name thing which was also the worst bit (and that's me making fun of Rothfuss saying about two different things about a page apart "it was the most beautiful thing I'd seen in three years") was the part where Kvothe suddenly takes off to go investigate a Chandrian rumor. This may be the most contrived situation I've ever seen in a book. Sure, we know that Kvothe is interested in the Chandrian and that he has very passively been trying to find out about them. Very passively. So passively you can barely tell. Then, he hears this rumor about a Chandrian attack and he just drops everything and runs off to investigate it.

There are two things about this:
1. It is clear from the context of the book that the land Kvothe lives in is very rumor infested. Therefore, it is unreasonable to suppose that this is the first rumor of the Chandrian that Kvothe has heard in the past few years, but he takes off specifically to investigate this particular rumor. It would be more believable if Rothfuss had shown us an ongoing interest in Kvothe tracking down these rumors, but he doesn't do that. We're left to believe that Kvothe, at 15, suddenly has an irresistible urge to check this one out.
2. The other option is that this really is the first rumor about the Chandrian that Kvothe has heard since they killed his family. Then, we have to wonder why that is. It's a superstitious land full of superstitious people and rumors about all sorts of mystical things. That there wouldn't be other rumors like this is even harder to believe.

Of course, when he gets there, he finds Denna there in the middle of it. Of course, he does.

And he kills a dragon. Of course, he does.

Which brings us back to blue fire and why there hadn't been any Chandrian rumors due to the blue fire of the dragon.

Basically, this book contained nothing new. It was every fantasy cliche there is out there, including the orphaned boy living on the streets, shaken up and redistributed less skillfully than the sources they came from. Especially, the Kvothe Potter sections. There was nothing charming or interesting about any of it, just Kvothe being better than everyone always.

The end is the only thing that saves the book from being a complete waste of time, but that's just there to entice you on to the next one, and I am tempted, but I'm pretty sure that one will be more of the same, meaning barely more than a complete waste of time. At the moment, I plan not to be lured into going on. Maybe if Rothfuss ever finishes the third one and I hear that it is just extraordinary... Of course, that's what I heard about this one.
Posted by Andrew Leon at 12:00 AM