Do You Know the Code? 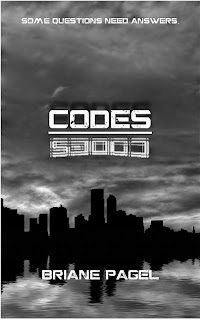 Briane Pagel has a new book out. He says it's the best book he's ever written and, seeing that I have quite liked his other books (except for that pineapple thing), at least the ones I've read, I'm really hoping for good things from this one. I've already picked it up but, with the end of the school year and everything going on with my kids, I haven't had a chance to start reading it. I'll let you know what I think as soon as I do, though.

Until then, here's Briane to talk about Codes!

I know this is the space Andrew has lately been reserving for his discussion of how to handle, or not handle, a bad (or, as it was, not-really-so-bad) review, and I think that’s important work. Someone has to stand up to bullies, and Andrew has a good platform from which to do so. That’s why I am extra-appreciative of his willingness to lend me his Wednesday slot in order to let me provide some thinly-veiled marketing in the guise of a LISTICLE!

P.S. WHY does everything on the internet have such a stupid name? Years into it, I still cannot bring myself to say that I tweeted something. I tell people “Oh yeah I posted a link to that on Twitter.” “Blog,” “Tweet,” “listicle,” etc. etc. It’s so degrading. I feel stupid whenever I talk about anything I do on the internet. People will say Are you going to try to publicize your book and I have to say Yes, I plan to… *sigh*… blog… about it.

Where was I? Oh, right: Listicle. People love lists! That was one of the things mentioned in an article I read entitled, “These 5 Amazing Things People Love About The Internet Will Change Your Life.” (Other things included cats and lists about cats.) So I’ve been making the rounds, promoting my new book, Codes, and it just made sense. What better way to discuss a near-future book about a corporation trying to perfect the process of human cloning by implanting computer-programmed personalities into them and marketing the result than to create a superficial list designed to generate fake controversy?

Did that sentence make any sense? It’s been a long day and I got lost in some of the clauses there.

Knowing that Andrew usually uses this space to discuss people’s reactions to bad reviews, I decided that the theme for my latest list would at least tangentially relate to that topic, and so I came up with the idea of reviewing shows and books I’ve never even seen, and, of course, panning them.

If you’re like me (and I pray you’re not. TAKE MY WORD FOR IT) then there are LOTS and LOTS of things you HATE, almost-sight-unseen. I am a champion at hating stuff before I know anything about it. I can dislike something practically before I know it exists. It’s a talent. Books, movies, TV shows, songs, certain shades of green… doesn’t matter what it is, I can hate it right up front. And, more than just hate quietly, I can -- based on that completely uninformed opinion review the bejeebers out of that thing I hate. YES! FREE SPEECH! ‘MERICA! Let’s get to it!

1. The Walking Dead: I have never seen this show, or even a preview for it. That has not stopped me from hating it so much that I have started disliking other shows if a commercial for TWD airs during them. Can we NOT have any more allegories about our society told through the zombie format? This thing is all over! I can’t go onto a web page without seeing some picture of a sweaty guy or girl holding a machete and looking fierce next to a headline about how TWD is really going to amazeballs you with the storyline this week. LET ME GUESS: They nearly get overrun by zombies but then hack their way out! Also, where is everyone getting these machetes in the first place? I am 46 years old and I have never seen a machete in real life. Do the zombies bring them? Do they sell them at the True Value ™ Hardware Store? In real life, a zombie apocalypse would feature 100% fewer machetes and 100% more “Dads holding a bed lamp they grabbed off the table.”

2. The New Star Trek Movies: This automatic-dislike probably began when they cast Chris Pine as Captain Kirk in the first “new” Star Trek movie. Looking at Chris Pine gives me the same feeling I get when I grind my teeth, only less pleasant. That was bad enough. But then I heard that in one of these movies they had Kirk driving around in a hot rod on Earth. You know what space operas don’t need? Drag races on planet Earth. But to top it off, they remade “The Wrath Of Khan.” YOU CANNOT REMAKE THE WRATH OF KHAN. That is like remaking a rainbow. Like remaking a glorious, rage-filled, fist-shaking, Enterprise-attacking, earwig-monster-injecting, desert-planet-inhabiting, Fantasy-Island-operating rainbow.

3. The Hunger Games. OH. MY. GOD. From the moment I first heard of this series of books I thought they sounded like the dumbest thing ever. Here is my understanding of the plot: some government starves all its citizens, so that they will send a bunch of kids to shoot each other with arrows in order to get a little bit of extra food. HOW DOES THAT MAKE SENSE? How would that system work? It could never! But then after all the kids shoot each other or whatever, the two (?) winners (?) get elected to the government or something, like Charlie winning the chocolate factory only Jennifer Lawrence didn’t even have to give back the gobstopper? NO DO NOT BOTHER EXPLAINING WHERE I GOT IT WRONG. The plot doesn’t make sense. It doesn’t have to, because it’s a book for teenagers, and teenagers love it when things don’t make sense. It lets them be convinced that adults don’t ‘understand’ them. That’s why I loved The Cure when I was seventeen, and why kids nowadays love The Hunger Games and its sequels, New Moon and whatever the third one was with Percy Jackson.

3a.Bonus hatred: I cannot stand Jennifer Lawrence. Not even a little bit. She is somehow the female version of that guy in 8th grade who thought smelling farts was funny. Associating her with a movie makes me that much less likely to see it. If “J-Law” showed up on my doorstep with a giant pizza and a bootleg director’s cut of the next Star Wars movie, I wouldn’t even answer the door.

Let’s do one more. This is fun! How about:

4. Anything by Isaac Asimov. To be honest, I am not sure where this one comes from because I do not know really anything about Asimov other than I dislike him and everything I imagine he stands for. I know as a scifi-ish writer myself I am supposed to apparently love Isaac Asimov and everyone’s always talking about how he predicted the future and his laws of robotics and etc blah blah blah, but I can’t be bothered. I’m not even sure what Asimov is supposed to have written. Foundation, I think? I’d go look it up but I’d rather my browser not have a history of searching for Asimov stuff. Even I am cooler than that. I think Asimov wrote that story that got made into I, Robot, starring Will Smith, and can we as a society really take an author seriously anymore if Will Smith likes his stuff? I’m also pretty sure that in reality there’d be no way robots could be programmed not to harm humans, which I think was a ‘law’ of robotics Asimov pulled out of thin air and made people believe was a thing. It’s so dumb: suppose I was being held hostage by Chris Pine and Jennifer Lawrence and the only way I’m getting out alive is if C-3PO (do NOT get me started on R2-D2!) snipes them both with a laser rifle from across the road. OH WAIT there’s a LAW that he can’t kill them, only if he DOESN’T, then he’s harming a human by letting me die, right? That is NOT how laws work, Isaac Asimov. You don’t see gravity only holding people down if it’s nonparadoxical.

In closing, you’ll note that the only people I picked on in here are people who are dead, or who don’t matter, or who are Jennifer Lawrence and Chris Pine and so deserve it. I don’t have to worry about anyone overreacting or calling me crazy or taking me to task for these entirely unfounded and ill-informed, and yet still 100% correct, opinions. Don’t forget to mention in the comments how much you agree with me!


Something I don’t hate: My book, Codes: Robbie had an ordinary life, until she walked into Gravity Sling. Now he’s seeing coded messages everywhere, being chased by shadowy big-corporation goons, and questioning literally everything about the world as he knows it. Some questions need answers. This Phillip K. Dick style debut science fiction novel raises questions about how people use technology and each other.