Exploring Personality: Part Eleven -- "Can't we all just get along?" 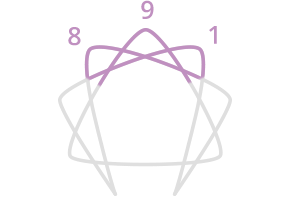 Ah, the Nine. The Nine is the most common of all of the types. Perhaps up to 40% of all people. Not only do you probably know one, you probably are one. Okay, maybe not quite "probably" but pretty close to it. You can always tell a Nine by his very distinctive characteristic of... oh, wait... the Nine has no distinguishing characteristic. That's what makes a Nine a Nine. Sort of.

The core motivation of the Nine is peace and harmony. Because they want to keep conflict to a minimum -- well, completely absent if possible -- they are adept to seeing all sides to a conflict and helping to bring about a peaceful resolution, hence the name Peacemaker or, as they are also sometimes called, the Mediator. They can see every side, that is, except their own. Their drive to keep things calm, causes them to submerge their own desires so that they often don't even know they have any.

They also tend to take on the characteristics of the people they spend the most time with, called "merging," which can cause them to appear to be the same enneatype as the person they're with. They do this unconsciously as a tactic for creating more harmonious relationships. You can't have a conflict if you always want to do exactly what they person you're with wants to do.

All of the Nine behaviors are driven by their intuition. They're experts at picking up on nonverbal cues from other people and adapting their behavior to go along with or counter, depending on the need, the other emotional state of the other person. So good are they at sensing the condition of other people, they rarely have any idea of how they feel about any given situation. Questions aimed at them about their own feelings often get responses of "I don't know" or "Well, Bob feels..."

I have avoided personal examples in these so far but, this time, I'm going to give you one, because it's such a good example of Nine behavior:

A couple of years ago, we were trying to find out what my oldest son wanted for his birthday dinner. This should be an easy task, right? Not so much when you're a Nine, which he is. The conversation was something like this:
"Hey, so what do you want for your birthday dinner?"
"Oh, I don't care. Whatever you guys want to have."
"It's your birthday; we want to have whatever you want to have."
"Whatever's easiest, then."
"Anything you choose will be the same amount of easy."
"Whatever's cheapest, then."
"Look, that doesn't matter. Just tell us what you want."
"My brother wants pizza."
"Your brother always wants pizza. What do you want?"

I'm not exaggerating when I say that that conversation lasted for half an hour. It chased its tail. It went in circles. It was like the Scooby gang being chased by a ghost in a haunted house: everyone, including the ghost, running right into everyone else, getting scared, and running away again. We had to sit him down and make him think about what he wanted. He kept deferring in his responses to what he felt like other people would want.

Something as simple as "what do you want to eat for your birthday" became a rather tortuous task for him to figure out because, really, he didn't know. And that was an easy question. That's how it goes with Nines.

Ironically, the Nine's obsession with keeping their environment harmonious very frequently results in inner conflict. The fact that they are always burying their own desires (to the point of losing touch with them) to fulfill the desires of others causes them to feel invisible and creates a deep longing to be noticed. Of course, their lack of initiative and internal drive, actually, to not be noticed (because that can create disharmony) comes into conflict with this, a source of their angst. Also, any desires they have are unspoken and, therefore, unmet. These two conditions, unmet desires and feeling invisible, can create a deep well of anger within the Nine. Mostly, this anger goes unrecognized and submerged, but it can leak out as passive/aggressive behavior that the Nine is oblivious to. Occasionally, when pressed, this anger can result in huge outbursts of temper that quickly dissipate.

In stressful situations, especially situations where they're with people they're unfamiliar with, Nines can become nervous and jittery, unable to make any kind of decision because they don't know the people well enough to facilitate activities or resolve conflict. In situations of overt conflict, Nines may well seek physical refuge and, if failing that, will withdraw into themselves.

Nines who have spent the time getting to know themselves and figuring what their desires are can become very purpose-driven while still being able to resolve conflict with or for other people. They can learn to stand by what they actually want and achieve an internal harmony even in the face of external conflict.

Nines may appear to be introverts because of the way in which they become overwhelmed by conflict, but that isn't necessarily the case.
Posted by Andrew Leon at 12:00 AM