When I was a kid, we always went to a Christmas tree lot to get our tree, generally during the weekend after Thanksgiving, because that was the weekend my mom deemed that the house had to be decorated. There was no Christmas at all before Thanksgiving, then it exploded into our house by the end of that weekend. We had a big house and never had less than a 10' tree, so this was no small feat, especially since we decorated the entire downstairs and outside of the house, too.

In some ways, a big Christmas tree is easier than a small one. For one thing, a bigger tree has a real trunk. Christmas tree stands like real trunks. It's actually really difficult to find a good stand for a small Christmas tree, small being trees no more than six feet tall. Even using the smallest stands we could find, we always had problems with the trees staying upright. So, a few years ago, we switched to these stands they provide at the tree farm (don't worry, they're free-range trees) where we get our tree every year. 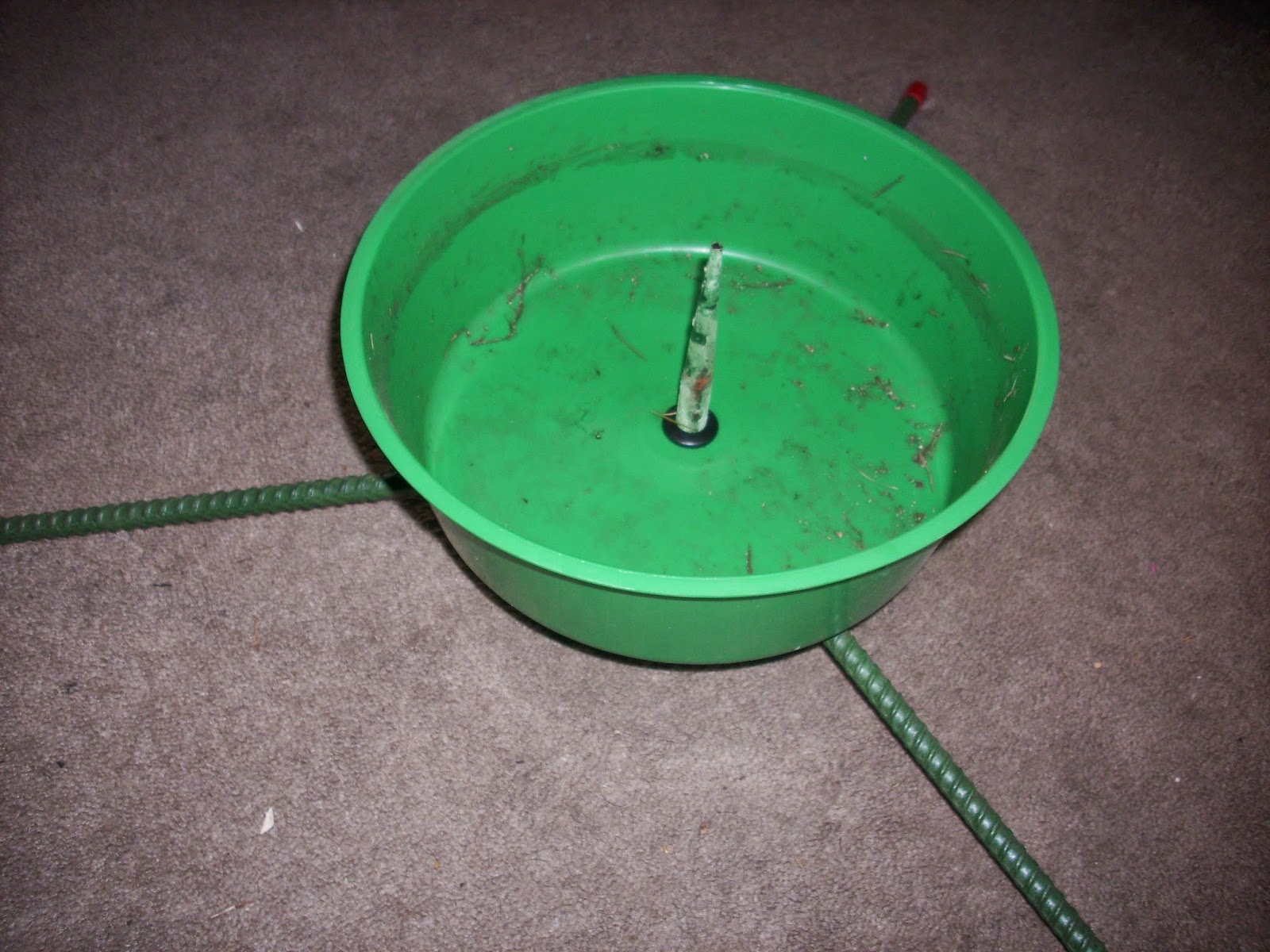 See that spike there in the middle? The tree goes right down on that. Or maybe you all know that? I have no way of knowing whether these things are commonplace or not. As far as I know, there wasn't anything like this when I was a kid, and I've never seen these kinds of stands at the store. I've only seen that at the farm where we hunt our tree.

So let's go with the assumption that you've never seen one of these before, in which case you are probably wondering how you get a tree onto that spike. It's not by hammering the stand. Actually, the guys at the farm -- stock pond for trees? I think hunting a tree at a tree farm is kind of like fishing in a stock pond -- have this contraption for drilling a hole in trunk so that it slides down onto that spike. It should be an easy process; in fact, it has always been an easy process in the past. We've never had a leaning tree before.

But this year... Well, the guy helping me was new, evidently. I say that because, as soon as he took the tree over to drill it, he asked for someone to help him. Still, not a big deal. Except that no one came over to help him, so he started trying to put the tree on the contraption by himself, then he yelled over at me to see if I thought it looked straight. I say "yelled" because I was at least 30' away, back where, you know, the customers are supposed to be. Which means I only had one view of the tree, and it looked fine from where I was standing.

So I was kind of shrugging at the guy, because I didn't feel like I was a good person to ask when, finally, one of the guys who has been there a long time hollered over that the tree wasn't straight. He started coming over but, then, some guy who was closer came over and the other guy went back to what he was doing. Now, the first guy finally had help... except, then, the two guys started arguing over how to do it (making me believe the "helper" was also new), the tree started swaying around, they seemed to come to some agreement, almost dropped the tree, re-straightened the tree, and, finally, drilled it.

I thought that was the end of the story. Like I said, we've never gotten a tree that leans before. But...

We got the tree home, I got out a stand, I worked the hole in the bottom of the trunk down onto the spike, and... We have a crooked-ass Christmas tree. [See, I said I was going to start using that word more. Ass, that is.] Seriously, the tree lists about 10 degrees off of the perpendicular.

And, yes, because I know you're going to ask: I did try to take pictures, but, due to the way I have the tree situated -- you know, to minimize the tilt -- you can's tell from the pictures how bad it is. And they didn't come out all that well, anyway. I should have taken pictures while I was putting it up before we had it all decorated and stuff, but I was distracted by trying to make it look like the tree wasn't about to fall into the middle of our living room. So, no, there will be no Christmas tree pictures, this year.

However, there should be Christmas Day pictures and stuff as usual. You know, after Christmas Day happens. And, maybe, once I get the tree taken down and stuff, I'll get some pictures of it outside so that you can see how crooked it is. Maybe I should have just taken it back...
My mom did that once. Um, twice, actually.
I thought I'd told that story before, but I'm not seeing it in my old posts. It's kind of a funny story...
Posted by Andrew Leon at 12:00 AM